This level is unique compared to other levels in both games because not only it lacks K-O-N-G Letters and Puzzle Pieces, but also features a Rocket Barrel that rides vertically. it also gives the Kongs access to the boss level in the same world. Additionally, it is the shortest regular level in both games.

Similar to other levels of the same world, it begins in a factory setting, though the primates must enter a large rocket. A Rocket Barrel is in the large vehicle, which the heroes ride the barrel out of into the skies after the player has pressed the "Jump" button multiple times.

When the Kongs take off, the player can move the rocket left or right by using the directional buttons. As long as the player holds the "Jump" button, the vehicle will accelerate and move upwards, being capable of reaching the top of the screen. As the primates rise above the trees and machinery, they head towards a trail of bananas and an Extra Life Balloon. By progressing higher, the sky becomes darker, and they ascend through a narrow passageway of factory walls. Floating ships full of tiki enemies are just ahead of here. After the primates dodge the airships for some time, one of the ships begins to drop many bananas. When they pass this ship, they rise slightly higher to finish the level. 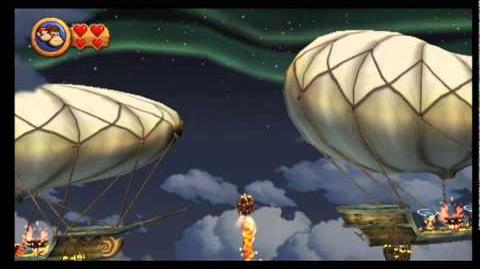