Lanky Kong is an orangutan Kong and an ally of the Kong Family. He is described as "a twisted twig on a distant branch of the family tree"[1] and non-biological distant cousin. He, along with Tiny and Chunky Kong, first appeared in Donkey Kong 64. He is currently voiced by Kentaro Tone, but was previously voiced by Chris Sutherland in Donkey Kong 64.

Because of his name and orange fur, he bears a resemblance to the Manky Kongs, which is a clan he may be related to. Despite his lack of style, grace, and him having a funny face, he has the longest arms of any Kong in the Donkey Kong series.

Quest for the Golden Bananas

In Donkey Kong 64, Lanky is one of the many Kongs imprisoned by the Kremling Krew at the start of the game. Lanky is found in the Llama's temple inside the level Angry Aztec, Donkey Kong, and his Coconut Shooter are needed to release Lanky from his imprisonment by the Kremlings.

Once Lanky is released, he can collect blue bananas, coins and Blueprints. Lanky Kong fights the boss of Gloomy Galleon, Puftoss. Once he defeats him, he gains one of the keys to K. Lumsy's cage. Also in this level Lanky can transform himself into Enguarde the Swordfish. In Fungi Forest, he has to race against a rabbit twice to gain a Golden Banana. Lanky Kong is the only character needed to enter the boss of Creepy Castle, King Kut Out.

During the final battle against King K. Rool Lanky has to make use of his great reach to activate a switch and then a barrel with a banana appears, Lanky next has to throw the barrel so the banana comes out and make use of the Trombone Tremor to make King K. Rool fall with a banana. In one of the cut-scenes Lanky appears at Hideout Helm and starts walking around the walls with two Kremlings going after him, in the end, a Kremling tries to walk on the wall and falls.

Throughout the game, Lanky gains a variety of bizarre abilities from drinking Cranky Kong's various potions or buying from Funky and Candy. His first individual ability is Baboon Balloon, while the second is OrangStand, and the third one is OrangSprint. Lanky's weapon is the Grape Shooter. His instrument is trombone; with this, he can use the Trombone Tremor. Aside from this, he can learn Simian Slam, Super Simian Slam, and Super Duper Simian Slam, which all Kongs use. Lanky Kong is the only character that can transform in Enguarde, similar to Donkey Kong transforming in Rambi.

After eight years of not appearing in games, except for cameo appearances, Lanky Kong makes a return as a playable character in the racing game Donkey Kong Barrel Blast for Nintendo Wii. In this game, he is an unlockable character. In it, he is considerably powerful and is assigned a Klump as his rival. He has top speed, medium boost, and poor agility. As all playable characters, he had the ability to do the ability known as Wild Moves.

In the Single Race cut-scene, he can be seen, along with Donkey, Tiny and Dixie, standing in front of their rivals, Kass, Kalypso, Klump, and Kritter. His bongos are blue with white parts, which resemble the colors of his clothes. This marks his debut in spin-off games. This game was his first appearance in the Wii console.

Lanky briefly appears in one of Funky Kong's minigames in the Game Boy Advance version of the game Donkey Kong Country 3. During one of the challenges at the Funky's Rentals, he is found in the water, along with other Kongs, and has to be protected from being taken away by boats with Kremlings on them.

Although he did not appear in Super Smash Bros. Melee, there is a reference to Lanky on the Kongo Jungle stage, as the DK Rap plays, after Tiny Kong's part, Lanky is mentioned. But in the sequel, Super Smash Bros. Ultimate his verse of the rap was removed, along with Chunky Kong's verse.

Lanky Kong appears as trophy in Super Smash Bros. Brawl. His trophy mentions his playable appearance in Donkey Kong Barrel Blast after years of not appearing in games. he also has his own sticker based on his appearance from Donkey Kong 64, it increases a throwing attack by six and can only be used by Donkey Kong or Diddy Kong.

He also appears as a trophy again in Super Smash Bros. for Wii U, and costs 300 Coins.

He also appeared in the N-Gang comic series, but only had minor roles. In the N-Gang comic, N-Gang vs. Nintendo, he teamed up with Banjo, Kazooie, Wario, Yoshi, Peach, and Donkey Kong, to play a soccer match against the N-Gang.

"A newcomer to the Kong clan and the joker of the pack. I haven't a clue whom he's related to – must be some distant cousin or something. Those silly stretchy arms give him plenty of potential, but I'm sure he'll be too busy clowning around to be of much use."
—Cranky Kong in the Donkey Kong 64 Instruction Booklet, page 7[2]

"This knuckle-dragging Kong looks like a clown, and it's more than just a coincidence. Think of him as a twisted twig on a distant branch of the family tree. Kremlings and Klaptraps may snicker at his goofy gait as he ambles in their direction, but there's nothing funny about a hyperextended sucker punch."
—Donkey Kong 64 Player's Guide, page 5[1]

"To the satisfaction of the other Kongs, Lanky has been at home on the DK islands for some time now. Originally he comes from the more distant Utan island, where relatives of the Kongs live.
The society there was much too boring and conservative for Lanky, however, so that he was attracted to the slightly chaotic members of the Kong clan.
Here he feels much more comfortable, since his constant silliness is always appreciated, especially by Chunky and Kiddy. Even a television offer could not move the enthuasiastic comedian to leave the island: he has been dying to experience an exciting adventure for quite some time! As a child Lanky made a bet with a friend, who could hang on a limb the longest.
Today you can still tell by his arms that Lanky won the bet!"

Lanky Kong has orange fur and long arms that trail along the ground, being the only orangutan in the Kong family. He also has a red nose and bright blue eyes. He wears blue overalls, with a white shirt that is too small for him, and on his back, he has a red and white patch. The buttons on his overalls are yellow. According to the lyrics to "DK Rap", he is described as having "no style" and "no grace", and a "funny face". And indeed, his face is locked in a goofy, absent-mindset expression.

In his recent appearance in Donkey Kong Barrel Blast, aside from being updated graphically he looks slightly bigger and his hair style was changed. In this game his voice sounds different. Lanky looks very similar to Manky Kongs, but unlike them, he is not a baddie.

One of the more eccentric, happy, and joyful members of the Kong Klan similar to Diddy Kong and Kiddy Kong, Lanky has been depicted as goofy, exuberant, erratic, loud, but also has shown intelligence and competence. He is probably the most laid back of them all, stumbling with comical style and flair akin to an actual clown or a court jester. He is a little out there, but his unorthodox ways of thinking and those incredibly long arms only help to make those tense situations the Kongs find themselves in, a lot easier to handle.

The majority of Lanky's abilities originate from Donkey Kong 64. 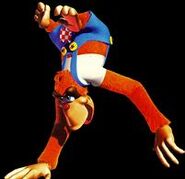 Artwork of Lanky Kong standing on his hands and moving, from the game Donkey Kong 64 for Nintendo 64.