Lake Orangatanga is the first area of Donkey Kong Country 3: Dixie Kong's Double Trouble!. It is a lake with boardwalks and fertile land as well. The lake is actually swimmable, which is very different from previous Donkey Kong Country games, where the Kongs were restricted to a set path (though the other land areas outside of the lake here are on set paths). The very top right of the area appears to be on a snowy cliff, which is odd because the environment around a lake is usually warm.

The first stage of Lake Orangatanga takes place on a boardwalk. Kongs can use team-up early in the stage to reach the above area for bonuses. This stage is pretty basic, it's a long walk across the boardwalk, with a few enemies to defying them. There are a few swimming areas as well. Noticeably missing is Rambi, who, unlike the previous two games, does not appear in the stage at all (nor the game), instead Elephant being found in the latter half of the stage.

The second stage of Lake Orangatanga is a mill stage. At the beginning of the stage, a metal, unbreakable door greets the Kongs. Jump onto the nearly lever to lower it, and quickly run through the opened door before it closes. The rest of the stage is fairly the same, with Dixie and Kiddy needing to jump onto the levers and dash to the temporarily opened door, they having to race to the door, with different obstacles trying to prevent them.

Another boardwalk stage, Tidal Trouble will start off with a Koin early in the stage. Use team-up to grab the Steel Keg above the left platform and score the DK Coin. This stage, as the name suggests, has a lot of water areas. The tide is going to the left, the opposite direction the Kongs are trying to go for the end. Note a secret Enguarde Animal Barrel located after finding the "O" KONG letter, in a small corner in the water area to the left.

The first snow stage of Donkey Kong Country 3: Dixie Kong's Double Trouble!, Skidda's Row is home to icy and slippery terrain, with Skiddas skidding along. They are quite bothersome, and are found many times in the stage. There are slopes and a few pits located in parts of the stage as well. Bonus Barrels are fairly easy to find, as they are in plain sight in the stage.

As the stage name suggests, this stage takes place inside a mill. Hop onto the platform to rise and find an Ellie barrel. Turn into Ellie and proceed through the stage as normal. Sneeks are common here. As the Kongs are going through the stage, they will notice lights in the factory. If Ellie so much as sees a Sneek under the light, he will get very scared and run, in fear. Elephants are infamously afraid of mice, and Ellie is no exception. Use the respawning barrels to defeat the, before they come within sight. Most of the stage is like this, with Ellie needing to carry a barrel to defeat the Sneeks. It is impossible to advance without getting rid of the Sneek's threat.

The first boss stage of the game, Belcha's Barn is, contrary to the name, an area inside a mill, with Belcha, of course, awaiting them. Belcha is a giant barrel, apparently living and angry working for Baron K. Roolenstein. He burps often, usually burping out a Knik-Knak, that can be jumped on to render it helpless, and thrown into Belcha's open mouth. This will make him go backwards, and repeat the process until the battle's over. 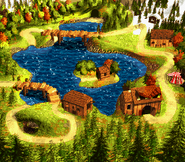 The overworld view of the SNES version of Lake Orangatanga.

Artwork of the Game Boy Advance version of Lake Orangatanga. Note that the exterior of Swanky's Dash is different than what it appears in the actual game.
Add a photo to this gallery
Retrieved from "https://donkeykong.fandom.com/wiki/Lake_Orangatanga?oldid=59120"
Community content is available under CC-BY-SA unless otherwise noted.