Kutlasses wear pirate hats with a large red feather in them, as well as a black vest. Kutlasses also carry twin swords, which are much too big for them; the game's instruction booklet humorously says that they ordered them off of an infomercial and that they looked smaller on television. Though the swords are their strengths, capable of counter-attacking jumps, they can also be their weakness. When a Kong comes near, they swing the swords downward with such force that they get stuck in the ground, leaving them open to attack. Even when their swords are up, they can still be defeated by a tag-team throw.

In later stages of the game, a green version of Kutlass is encountered. These Kutlasses are faster to attack and can pull their swords out of the ground faster. These are easily defeated with a barrel or an animal buddy (usually Squitter).

Kutlass resemble Klanks (to the point of being identical), another type of Kremling. They also have a slight resemblance to Bazukas and Kopters, yet more types of Kremlings. 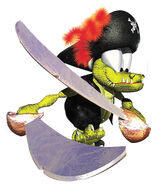 Retrieved from "https://donkeykong.fandom.com/wiki/Kutlass?oldid=59082"
Community content is available under CC-BY-SA unless otherwise noted.