Kuff 'n' Klout can only be defeated by TNT Barrels or Squitter who can shoot them with his web projectiles. They have two moves, running quickly and doing a high leapfrog. They are classified as Kremling Kreeps in Dixie's Photo Album, and can be found in Stampede Sprint, Criss Kross Cliffs, and Tyrant Twin Tussle, which means they are only found in the secret world Krematoa. If only one of the Tyrant Twins are defeated, the other one will remain motionless or disappear a few seconds later. 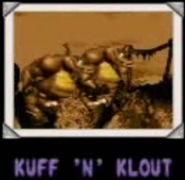