Kudgel (グラッバ, Glubba in Japan) is the boss of the world Krem Quay of the Crocodile Isle, as well as the third boss in the game Donkey Kong Country 2. He is a large, muscular, club-wielding Kremling capable of making very high jumps.

Kudgel is found at the end of Krem Quay, in the stage Kudgel's Kontest. The boss' main attack pattern is to jump out the screen, and try to land over the Kongs. When Kudgel lands, he will cause some shaking and will temporarily stun Diddy and Dixie Kong if they are on the ground. The player must keep moving when the boss is out of screen, because Kudgel will land right over the heroes. During the first phase of the boss battle, Kudgel will jump and land three times. The player can avoid to be stunned by jumping just before the boss lands. When landing for the third time, Kudgel will swing his club and harm any primates nearby it, even if they are behind him in the Super Nintendo Entertainment System version of Donkey Kong Country 2. The attack can be avoided by staying away from the boss or using very good timing to jump. After using his club, Kudgel will make a short, no shaking leap and make a TNT Barrel to fall down from the top in the middle of the arena, and he will jump out the screen. The player must quickly pick the TNT Barrel up, and avoid Kudgel before he lands over it and destroys the barrel. If the Kongs get too close to the boss, he will swing his club and destroy the barrel, harming the heroes only in the Game Boy Advance version. After being hit once, Kudgel will repeat the same previous attack pattern twice at faster pace each time. By the player using the same strategy from before and hitting the boss a total of three times, the first phase will end.

In the second phase, Kudgel will land without shaking the ground and he will start to make short leaps towards the heroes, shaking the ground and trying to land over them. The player must use good timing to jump and avoid to be stunned when Kudgel lands. After three short leaps, the boss will make another TNT Barrel to drop down in the middle of the arena. Like in the previous phase, the player must quickly pick the barrel up before Kudgel destroys it, and throw it at the boss without getting too close to him. After being hit, Kudgel will repeat the same attack pattern twice at faster speeds. After receiving more three hits, Kudgel will finally be defeated, flying into the swampy background.

By defeating the boss for the first time, the primates will earn a Kremkoin, and the world Krazy Kremland will become accessible in the overworld map of the Crocodile Isle. 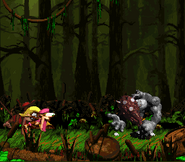 Dixie and Diddy Kong freaking out at the sight of Kudgel as seen in the game Donkey Kong Country 2: Diddy's Kong Quest for SNES. 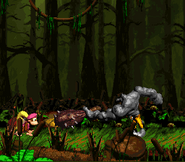 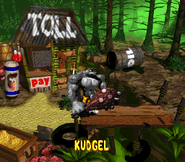 Kudgel during the credits cutscene as seen in the North American version of the game Donkey Kong Country 2: Diddy's Kong Quest for SNES. 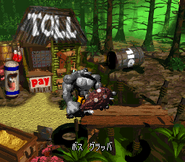 Kudgel during the credits cutscene as seen in the Japanese version of the game Super Donkey Kong 2: Dixie & Diddy for Super Famicom.