"Any recollection of why I'm referred to as... Krusha?"
—Krusha in the episode "Speed" from the Donkey Kong Country animated series.

Krusha, also known as Kruncha[1], is a high ranking muscular Kremling which serves as first close protection officer from Kremling Krew because of his brute force.[3][4][5][6]

As Kruncha, the enemy is a blue/red muscular Kremling with overgrowth arms and a small lower torso. He wears a red bandana with white polka dots, earrings, yellow clothes, golden arm bands and an anchor tattoo in the shoulder.

Krusha make his first appearance in the original Donkey Kong Country game where he first helped in stealing the banana hoard by defeating Diddy Kong. The regular variants of the enemy debut in the Monkey Mines stage Millstone Mayhem, at the very start of the stage.

Krushas are rare enemies usually in a blue/yellow color that march in place. Diddy Kong cannot damage Krushas alone at all. His cartwheels and jumps will be laughed off as they rebound. Only Donkey Kong could defeat them by jumping on their heads without the aid of a barrel. When DK uses his Hand Slap on Krushas, they will laugh it off, though DK will still get single bananas in the Super Nintendo Entertainment System and Game Boy Advance versions of Donkey Kong Country. However, Donkey Kong cannot beat them with roll attacks.

Alternate, rare gray-colored variants of Krushas appear in some stages of the world Chimp Caverns: Platform Perils in the Super Nintendo Entertainment System and Game Boy Advance versions of the game, and also Manic Mincers and Necky Nutmare in the Game Boy Color version. This stronger type of Krushas is completely invincible even to Donkey Kong's jump attacks and the only method to defeat them is by throwing barrels at them, making stages where they appear harder. Donkey Kong cannot use his Hand Slap move to receive bananas from these enemy variants either. In the stage Platform Perils, Vine Barrels are crucial weapons used to defeat them.

Regular Krushas reappear in the game Donkey Kong Land, where they are essentially identical in all regards to their appearance in Donkey Kong Country, being harmed only by Donkey Kong's jump attacks and barrels throw at them. Their stronger variants in gray do not appear in the game supposedly due to hardware limitations of the Game Boy system.

Krushas return as Krunchas in the games Donkey Kong Country 2 and Donkey Kong Land 2, as well as pirates. Neither Diddy nor Dixie Kong can jump on their heads alone to defeat them due to their lack of strength. In fact, upon doing so they will make the Krunchas growl angry with a arm-muscle gesture and glow red, causing them to walk much faster for a brief period of time. During this enraged state, if the primates try to jump on Krunchas again, they will be harmed. The main way to defeat them is via throwable weapons, such as crates, barrels and treasure chests, or by using the "team-up" ability to throw the secondary Kong at the Krunchas when they are not angry. Projectile attacks from Animal Buddies, such as Squitter the Spider and Squawks the Parrot, are capable of defeating Krunchas at any moment. However, other Animal Buddies in both games can only harm these enemies when they are not angry. Krunchas are not immune to the heroes' attacks when they are under the effect of an Invincibility Barrel.

In the game Donkey Kong 64, the player can unlock Krusha in the multiplayer mode by photographing fifteen Banana Fairies, accessing the option Bonus at the main menu screen of the game, and toggling on Krusha in the Battle option. During the multiplayer, the playable Krusha's movements and physics are similar to Donkey Kong and Chunky Kong, but he utilizes an Orange Grenade Launcher in combat, as opposed to Chunky's Pineapple Launcher.

"Check out the big guns on this crazy Kremling! Krusha is the big, blue, buff dude. He's also the big, silver, buffer dude! Donkey Kong can take out the Blue Krushas by jumping on them or rolling through them. Unfortunately, Diddy can not do the same. They make a really funny groaning noise when they bite the dust. When it comes to the Silver Krushas, just leave them alone. They're too tough to take out. Jump over them when the coast is clear or toss a barrel at them if you have one handy."
—'Donkey Kong Country Player's Guide (SNES version), page 12

"Krushas, with their bulging biceps and pecs, are the brawn of King K. Rool's army. Donkey Kong can take out the blue Krushas with one jump, buy the beefy Krocks are a bit too much for Diddy to tangle with. Avoid the silver Krushas by jumping over them, or destroy them with barrels-they're the touguest of all the Krocs."
—Donkey Kong Country Player's Guide (GBA version), page 14

"And let's not leave out Krusha, who has a chest like a boulder and a brain to match."
—Nintendo Power Vol. 76 (SNES version), page 26

Krusha is one of the main characters and antagonists on the Donkey Kong Country animated series. On the show Krusha was apparently King K. Rool's bodyguard and a high-ranking member of the Kremling Krew. Despite these high positions and responsibilities, Krusha is extremely dimwitted, having a hard time grasping simple concepts and becoming easily distracted. Interestingly, Krusha likes watching "The Sing Along with Uncle Swampy Show", a show meant for young children.

Krusha is also apparently best friends with K. Rool's second-in-command, General Klump and is oftentimes used as the muscle in Klump's schemes. Despite being well-meaning, Krusha's attempts to aid the Kremling Krew often end-up in disaster, causing more damage than good.

In the episode "Speed", Krusha was run over by a mine cart, causing him to become highly intelligent. He then devised a diabolical plot to defeat the Kongs and then claim the Crystal Coconut for himself, managing to even force K. Rool into submission. Krusha is quite evil in this newfound state of mind, considering K. Rool not being ruthless enough in his schemes. Despite K. Rool giving in to Krusha and letting him lead, Krusha considers him disposable, only intending to save him upon Klump's request. However, by the end of the episode, Krusha gets run over again, once again becoming the dimwitted henchman he always was, and fortunately, everyone survives.

In the English version of the animated series, Krusha was voiced by Len Carlson. 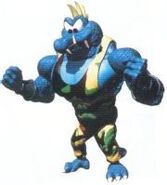 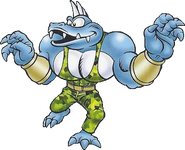 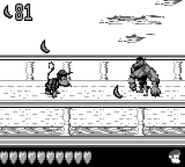 Diddy Kong running towards a Kruncha, as seen in the game Donkey Kong Land 2 for Game Boy.

Krusha as seen in the game Donkey Kong 64 for Nintendo 64.

Krusha standing beside a Kasplat as seen during the multiplayer mode of the game Donkey Kong 64 for Nintendo 64.