As their name implies, Krochead Barrels, upon being touched by either Diddy or Dixie Kong , will make several Krocheads to emerge from the swamp water, which the heroes must use as stepping platforms to cross over large gaps. However, the Krocheads summoned by these barrels will only be surfaced for a short amount of time, meaning the Kongs will need to hop on them and move forward quickly, before they submerge themselves again, making the primates to sink down into the swamp.

In Donkey Kong Country 2, only green Krocheads are affected by Krochead Barrels. When the Krochead figure on the barrel is blinking, it indicates that the barrel is active. In both games, if the primates touch the barrel again, even after it is already active, the duration of its effect will reset, however, in Donkey Kong Land 2, the Krockhead Barrel will not make a sound effect again until the Krockheads have submerged. 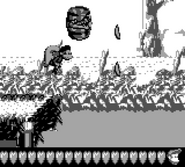 Dixie Kong about to touch a Krockhead Barrel, as see in the game Donkey Kong Land 2 for Game Boy.
Deutsch
Community content is available under CC-BY-SA unless otherwise noted.
Advertisement