Krocheads[1], or Krockheads, are enemies used as stepping platforms in the games Donkey Kong Country 2 and Donkey Kong Land 2.

Krocheads are a primitive Kremling subspecies that are native to the Crocodile Isle swamps[2] and volcanos. Their heads are the only part of their body seen in the games.

Despite being enemies, Krocheads are incapable of harming Diddy and Dixie Kong upon contact. Instead, they can be used as stepping stones to traverse wide sections of lava or swamp water.

There are two types of Krocheads in Donkey Kong Country 2. The green variant is the most common, and they only react by sinking slighty when the Kongs step on them, while releasing a specfic sound effect. Usually, this type already appears emerged from the liquid which it is swimming in. However, some of them can quickly submerge and re-emerge after some instants, repeating this pattern constantly. If the primates are stepping on them when they submerge, the heroes will also sink into the liquid and be defeated. It requires the player to use good timing when jumping on these enemies. During the second half of the stage Krockhead Klamber of the world Krem Quay in the same game, green Krocheads will only emerge from the swamp if the heroes touch a Krochead Barrel nearby. However, the player must progress over the enemies quickly because of the temporary effect of the barrel, with the green Krocheads submerging soon afterwards.

The second variant of Krochead is brown in the Super Nintendo Entertainment System version of Donkey Kong Country 2, and red in the Game Boy Advance version of the same game. They are more rare and also serve as stepping stones over lava and swamps. But as soon as the Kongs step on them, they will throw the heroes upwards. It allows the the primates to reach high places. It is not possible to control the height, but the player can control the direction of the throw by using the "Left" or "Right" button. In Donkey Kong Country 2, brown/red Krocheads are not affected by Krochead Barrels, and they do not submerge into liquid either.

During the battle against the boss Kleaver of the world Krem Cauldron, Krockheads replace hooks from Donkey Kong Country 2, used by the Kongs in order to traverse the lava between the two edges of the arena. These enemies appear three times through the boss battle. If the player takes too long to use them for traversing the lava pit, the Krockheads will submerge, making impossible to progress the battle without restarting the stage Kleaver's Kiln. 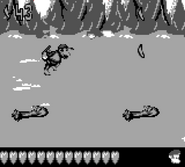 Diddy Kong jumping between two types of Krockheads, as seen in the game Donkey Kong Land 2 for Game Boy. Notice the lack of physical distinction between the regular Krockhead (at the left) and the other one (at the right) which throws the Kongs upwards.

Dixie Kong stepping over a green Krochead, as seen in the game Donkey Kong Country 2 for GBA.

A red Krochead after throwing Dixie Kong upwards, as seen in the game Donkey Kong Country 2 for GBA.