In Donkey Kong Country 3, Kroc only appears in the K3 stage Krack-Shot Kroc of the Northern Kremisphere. Inside this stage, an aiming cursor will stalk Dixie and Kiddy Kong unrestlessly, after they are transformed into Squitter the Spider, and attempt to blast them. As soon as the Animal Buddy reaches a sign depicting a cursor, similar cursor will track down the spider. In the Super Nintendo Entertainment System version of the game, the player will also hear a warning horn after crossing the sign, leaving the first Bonus Room or re-entering the stage by using a Star Barrel. The cursor will aim and shoot large fireballs at regular intervals, staying stuck in place during the shots for a few seconds. In the Game Boy Advance version, an evil laughter will be heard just before each shot, and the cursor will stay stuck in place for a shorter time when compared to the previous game version. By the player using very good timing, Kroc can also be fooled into shooting some moving enemies, including red Buzzes. However, it is advisable to just move out of the way during shots and keep going forward. There are also various blast shields on the foreground across the stage which Squitter can use as cover against the fireballs for unlimited time.

Inside the second Bonus Room of the stage, the player will take control of a similar cursor in order to defeat ten enemies within a time limit of forty-five seconds and earn a Bonus Coin. The cursor can be moved freely around the interior of the room by the player using the directional buttons, and fireballs are shot by pressing the "Jump" button. The ammunition is unlimited, but only a single projectile can be shot per time. In the SNES game version, the shooting trajectory is an arc, forcing the player to compensate it by positioning the cursor a bit above the targets. However, in the GBA version, the fireballs are shot at straight lines, making to aim and hit enemies easier. Oddly, in the same game version, if the player shoots a fireball on the ground at the lower left edge of the room, next to the blast shield, they will somehow harm the primary Kong, losing the Bonus Room. At the end, the Bonus Coin can only be collected by the player shooting a fireball at it.

After going past a No Cursor sign, almost at the end of the stage, Kroc will cease of pursuing and shooting at Squitter. Unlike No Animal Signs, the same cursor will not disappear and produce prizes after crossing it. Instead, the cursor will slowly move away from the sign and stay stuck in place eventually. If the player moves backwards and goes nearby the sign, Kroc's cursor will quickly resume the behavior of tracking and shooting fireballs.

In Donkey Kong 64, Kroc appears in the level Angry Aztec, in the area with the five-doored temple. Whenever a Kong has obtained a Golden Banana inside it, a yellow cursor will appear with a menacing voice that yells "Get Out!" and a countdown timer will appear at the upper right corner of the screen. Kroc can not be defeated and instead, the primates need to evacuate the area within the amounted time. If a hero fails to exit the temple on time, Kroc will blast the Kong, and they either lose health or get defeated.

In Crystal Caves and Creepy Castle, Kroc reappears in certain areas, such as cabins, igloos, garden houses, but only if a primate fails at a timed mission or, in Chunky Kong's case, gets caught by searchlights to obtain the Golden Banana. Depending on the area, the Kong will unfairly have a second to exit the area or they get blasted by Kroc. 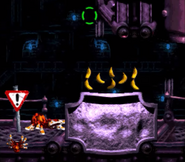 Squitter the Spider after crossing a warning sign and triggering Kroc's cursor, as seen in the stage Krack-Shot Kroc of the game Donkey Kong Country 3: Dixie Kong's Double Trouble! for SNES. 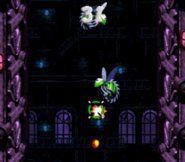 A green Buzz after being hit by a fireball shot by the player inside the second Bonus Room of the stage Krack-Shot Kroc, as seen in the game Donkey Kong Country 3: Dixie Kong's Double Trouble! for SNES. 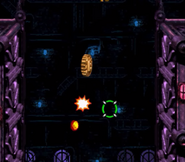 The Bonus Coin of the second Bonus Room from the stage Krack-Shot Kroc being collected by the player shooting at it, as seen in the game Donkey Kong Country 3: Dixie Kong's Double Trouble! for SNES. 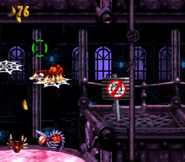 Squitter the Spider about to reach the No Cursor sign of the stage Krack-Shot Kroc, as seen in the game Donkey Kong Country 3: Dixie Kong's Double Trouble! for SNES.

Squitter the Spider evading a fireball shot by Kroc and defeating some Re-Koils, as seen in the stage Krack Shot Kroc of the game Donkey Kong Country 3 for GBA.

A Re-Koil after being defeated by a fireball shot by the player inside the second Bonus Room of the stage Krack Shot Kroc, as seen in the game Donkey Kong Country 3 for GBA.

Squitter the Spider after crossing the No Cursor sign and leaving Kroc's cursor behind, as seen in the stage Krack Shot Kroc of the game Donkey Kong Country 3 for GBA.

Sprite of Kroc's cursor, right before shooting a fireball, from the game Donkey Kong Country 3.

Tiny Kong running to evade Kroc's yellow cursor within a time limit, as seen in the level Angry Aztec of the game Donkey Kong 64 for Nintendo 64.

Lanky Kong being tracked down by Kroc's cursor before the enemy shooting at the Kong at the end of a time counter, as seen in the level Angry Aztec of the game Donkey Kong 64 for Nintendo 64.