"My loyal reptilian subjects. This marks a glorious day history for all Kritters."
—King K. Rool in the episode "Bad Hair Day" from the Donkey Kong Country animated series.

Kritters (also known as Kremlings[1][2]) are the most recurring subspecies from the Kremling population in Crocodile Isle. Various Kritters in the Kremling Krew are K. Rool's main troops and are very common in many stages.

The common Kritters are bipeds, have vertical pupils, red eyes, yellow pectoral, arms, 4 fingers, 3 toes with sharp toenails and a tail. They come in various colors, such as: green (most common), blue, brown, yellow, gray, red or purple.

In Donkey Kong Country, Kritters from the Kremling Krew wear a set of useless shoulder pads. In Donkey Kong 64, all Kritters wear black leather vests with a human skull-and-crossbones emblem on the back, but some varieties have different additional pieces. As of DK: King of Swing, DK: Jungle Climber, Donkey Kong: Barrel Blast and Mario Super Sluggers, Kritters have spikes on their forearms, belts with a skull buckle and ocher pants.

Several elements shown in Crocodile Isle and Kremlantis that Kritter subspecies is more dominant from Kremling species with many different members and many sizes.

According to the Lost World, their history was stored in this place where several Kritter statues as a tribal society.[3] Undead pirates as Kloak and Kackle as Kritters as well. K. Rool, a pirate Kremling who founded the paramilitary pirate organization Kremling Krew becoming king of Kremlings and rule his own island, is a Kritter.[4]

The common Kritters are short-temper with a ability to jump, punch, bite and run fiercely behind the enemy.

Skinny (most common), fat or small Kritters are weak that can be defeated by any Kongs attack. Muscular, large or burly members are quite invincible to the attacks of weak characters.

Although most of the members are male, but two members as Kass and Kalypso are female Kritters.

Kritters first appear in Donkey Kong Country, and they are one of the most common enemies, along with Gnawties and Zingers. Besides green, Kritters have a few color variations, each with their own distinct pattern of moving and jumping. Kritters are one of the weakest enemies, and Donkey Kong and Diddy Kong can defeat them with any attack, including throwing a barrel, jumping, rolling, or Donkey Kong's Hand Slap.

Green Kritters were changed to purple in the Game Boy Advance version; however, their photograph in the Scrapbook uses their original green artwork.

Kritters are one of the three Kremling enemies who return in Donkey Kong Land. Due to the Game Boy's monochromatic display, Kritters do not appear in different color variations. Kritters act the same as in Donkey Kong Country.

In Donkey Kong Country 2: Diddy's Kong Quest and Donkey Kong Land 2, enemies known as Klomps are Kritters that wear tattered red and white shorts, with each sporting a peg leg. Likewise, a distinct Kremling variety formed by Kaboings, which have two peg legs, replace Donkey Kong Country's jumping Kritters. Compared to the Kritters of the previous game, these varieties have a more upright posture, presumably due to their peg legs.

In Donkey Kong Country 3: Dixie Kong's Double Trouble! and Donkey Kong Land III, Kritters are once again replaced, this time by a type of Kremlings called Kobbles, which are surprisingly rare in the former game while extremely common in the latter. Jumping Kritters have also been replaced with enemies called Re-Koils, which are orange and bounce around on their tails instead of using their legs.

In the Game Boy Advance version, Kritters are the enemies of the Funky's Rentals challenges. They ride around in a black motor boat, which is capable of firing turrets. They have a different role in each of the four challenges.

Kritters (also called Kremlings in the Prima Games guide for Donkey Kong 64[2]) return in Donkey Kong 64 where they also appear as common enemies.

Kritters have an uncommon red variety that appear in the level Frantic Factory and the minigame Kremling Kosh. In Frantic Factory, Lanky Kong can earn a Golden Banana by memorizing the order that the red Kritters belch. In the Kremling Kosh minigame, there are numerous green and red Kritters who pop out of a barrel, flail their arms, and then quickly retreat into their barrel. Red Kritters are worth two points while regular Kritters are worth one point. Kritters also appear in three other mini-games: Mad Maze Maul, Stash Snatch and Busy Barrel Barrage.

During the boxing match between the Kongs and K. Rool, there are two Kritters who ring the bell to start the match. Both of them are wearing a tuxedo equivalent of the traditional outfit worn by Kritters; some other Kritters attempting to pull off a stadium light from K. Rool's head also wear this outfit. Whenever K. Rool is knocked down between rounds, the count to 10 starts. The Kritters always ring the bell once it reaches 8, by pressing a red button on either side of the bell. One of the Kritters has dim and silly behavior, for instance during one of the countdowns, it is waving the wrong way and only realizes this when the other Kritter rings the bell. After Tiny wins her round, both Kritters slam a button at the same time and accidentally break the bell. As a result, they cannot save K. Rool from losing the match after Chunky beats him.

Kritters also appear in DK: King of Swing, where they are simply referred to as "Kremlings". Kremlings are able to climb and swing from pegs like Donkey Kong. If there are nearby rocks and bombs, the Kremling tries throwing it at Donkey Kong.

A Kremling is an unlockable character in the Jungle Jam mode, marking the first time a Kritter is playable. The player can unlock Kremling after obtaining six gold medals. Kremling has the same stats as Donkey Kong, and its attack and jumping stats are balanced.

Kritters appear occasionally in the Donkey Kong Country animated series, and were voiced by Lawrence Bayne. The Kritters in the show were accurately based off the Donkey Kong Country game, but their tails were shorter and the eyes were spread more apart. A unique Kritter called Green Kroc, who was a minion of Kaptain Skurvy, was grayish in color, somewhat like Kaboing.

A blue Kritter attacked Diddy and Donkey Kong in a cave in the Club Nintendo comic "Donkey Kong Country". He gets scared by Donkey's huge shadow, projected onto the wall by Squawks' torch. Donkey ultimately defeats him by throwing a Barrel at him. Like every character in the comic, the Kritter was able to speak.

Kritters have recently begun to appear in the Mario spin-off sports games; in Mario Power Tennis they appear in Donkey Kong's Court. In Super Mario Strikers, they are the game's goalies, the game also has a robotic Kritter as the goalie of the Super Team. They reappear as goalies in the game's sequel, Mario Strikers Charged. In this game, though, you can play as them to block Mega Strikes. Four different colored Kritters, along with King K. Rool, are playable in Mario Super Sluggers.

Note all Kritters have the "Keeper Catch" ability, all bat left and catch right. He is a homerun hitter.

Kritters cameo in the fighting game Super Smash Bros. Brawl as two collectible trophies. Their descriptions are as follows;

Kritter
A member of the Kremlings. Led by King K. Rool, Kritters are the grunts of the army. They appear frequently in Donkey Kong Country in green, purple, blue, and other color variations--the blue ones 'will jump after Donkey Kong. Kritters also appear in Donkey Kong: Barrel Blast, pounding those barrels in pursuit of Donkey Kong.

Kritter (Goalie)
An underling of King K. Rool and the one and only goalie of Super Mario Strikers. In other words, it doesn't matter what team you play as--your goalie is going to be Kritter. Despite being at the very bottom of the Kremling ranks, he's responsible for what many might consider to be the toughest AND most important field position.

Kritters have a collectible trophy too. Look at the picture that shows the rewards acquired in Classic Mode! 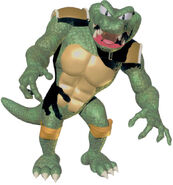 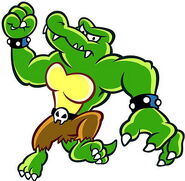 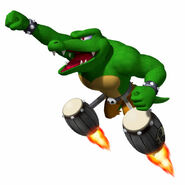