"The Kremling's crowning industrial achievements are the huge factories they built in Donkey Kong Country. These factories do not adhere to the strict safety codes, and are full of burning oil drums, faulty lighting and perilous platforms. Enter at your own risk."
—Donkey Kong Country Instruction Booklet[1]

Kremkroc Industries, Inc. is the fifth world of Donkey Kong Island in Donkey Kong Country. It is factory themed. Factories, elevators, mine carts, and even a polluted pond are examples of what the Kremlings have done to this area of island (as indicated by the area's background), especially in the Game Boy Advance version. This industrial zone were established by Klump and his half Kremling Krew army under King K. Rool's orders during the invasion.[2] Donkey and Diddy Kong will face Dumb Drum as the boss of the area.

The first stage of Kremkroc Industries, Inc. is a factory-based stage. Metallic floors, yellow caution strips, (flaming) oil barrels, Gnawties, the background and the 3-D foreground effect give this area a factory feel. By jumping on the upraised area near the beginning of the area, falling on the loose tile, and revealing a TNT Barrel, the first oil barrel can be destroyed and an early bonus game can be found. The rest of the stage involves the Kongs avoiding the dreaded Oil Drums, bouncing on tires, and using the TNT Barrels located in loose tiles on the floor to find Bonus Room. Rambi the Rhinoceros makes an appearance in this stage.

This stage has a two-in-one theme: a boardwalk theme and an elevator theme. After avoiding the coconuts thrown by a Necky at the start of the stage, Donkey and Diddy Kong should proceed to the elevator platform. Once the heroes set foot on it, it will automatically start, and the speed and direction are unchangeable. Many Neckies will come in the first half of the stage to pester the primates, either flying in the way of the elevator or spitting deadly coconuts at them. After the Star Barrel has been broken, Gnawties come to further annoy the Kongs, usually falling straight at them. Note the secret Bonus Room at the end, by falling down the last possible pit, below the platform of the "End" sign, which offers the extremely rare blue balloon, valued at three lives.

Stage swapped with Poison Pond in the Game Boy Advance version.
This stage first starts off as a regular cave stage, with many Slippas and Zingers to spare, even having ropes. Later in the stage, though, rising and falling elevators are found. Staying in a down elevator often leads to secret goodies below, though not all. The elevator part is quite tricky due to the timing required and annoying Zingers pressuring the player.

Stage swapped with Elevator Antics in the Game Boy Advance version.
Poison Pond is designed as a generic overpolluted underwater stage. As such, instead of the vibrant blue ocean color, the color is swapped for an ugly green shade. It is considered to be one of the hardest stages in the game by many people due to its high amount of enemies, and the fact that it is a water stage, where mobility is limited. Simply going to the left of the screen from where the stage starts will reveal a go-through wall, and the letter "K" can be found along with an animal crate containing Enguarde the Swordfish, which will make the stage easier. Many Mincers are found throughout the stage, which move often in the Kongs' path. Nearly every water enemy is in the stage as well.

Stage swapped with Blackout Basement in the Game Boy Advance version.
This is the fifth stage of Kremkroc Industries, Inc., and the second and final mine cart stage in Donkey Kong Country. Opposite to Mine Cart Carnage, instead of making the cart jump, Donkey and Diddy Kong can jump out of the cart to avoid dangerous obstacles, grab items or defeat enemies.

Stage swapped with Mine Cart Madness in the Game Boy Advance version.
The second factory stage and last factory stage of the game. The stage, as the name suggests, takes place in a lower part of a factory currently having electrical problems. The lights will constantly flicker on and off, and when the lights are off, the stage is pitch black, excluding the Kongs, single bananas and DK Barrels, but including the enemies. Thus, it is considered one of the hardest stages in the game. Simply play it safe to survive.

The boss of the area, Dumb Drum, is a giant oil drum that can spawn enemies. 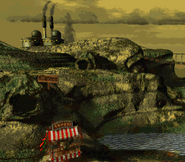 The first half of Kremkroc Industries, Inc. in the SNES version. 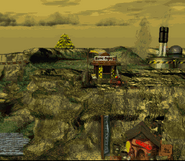 The second half of Kremkroc Industries, Inc. in the SNES version. 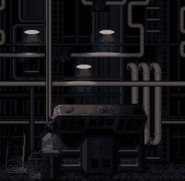 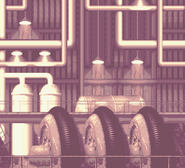