Krematoa, also known as Lost World,[1][2] is a secret hidden world found in Donkey Kong Country 3: Dixie Kong's Double Trouble!. It is a sunken volcano found by using the Turbo Ski to circle the four rocks lying around east of Mekanos.

The bear Boomer lives here, who is necessary to access each level. However, he only accepts Bonus Coins as a payment to unlock said levels. At the end of each level, the Kongs will find a Cog. When Boomer receives all five Cogs, the area will heat up, K. Rool's Knautilus will rise from the sea, and will be fought. The name Krematoa derives from a volcano called Krakatoa.

This is the third and final jungle area. Ellie takes the majority of this level along with Parry. Ellie will begin to run out of control after being scared off by three Sneeks and try to avoid dangerous obstacles or bash enemies until the end of the level.

This is the fourth cliffside level. The Kongs must climb to the top via shooting steel barrels from a Bazuka. The Kong also must switch barrels to eliminate red Buzzes with TNT Barrels that will block the Kongs' way.

This is the fourth and final cave level. The level is infested with the deadly Kremling duo, Kuff 'n' Klout. They will do anything to hurt the Kongs by running or doing leap-frog. They are vulnerable to TNT barrels or Squitter's web attack.

This is the fourth and final tree level. The level is infested with Swoopies. This is their second appearance as one appeared in Springin' Spiders. The swoopys will make good platforms to climb to the top of the finish, but most will fly in a line as a force field to block the Kongs' way.

This is the fifth and final cliffside level. The Kongs will begin to go in a rocket barrel to glide down and gather fuel. The level's only enemies are red Buzzes that are vulnerable to the fire from the rocket. This is considered the most difficult level of all because after getting halfway done, the Kongs must keep going up in order not to run out of fuel and not to bump into rock formations.

This second duel with Baron K. Roolenstein takes place in a submarine. The name also derives from the submarine Nautilus from "20,000 Leagues Under the Sea", used in "The Iron Giant". During the battle, the Kongs must toss steel barrels at Baron K. Roolenstein and avoid getting electrocuted from flying sparks at all costs. 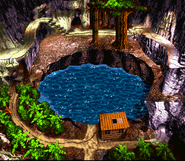 Krematoa before all of the DK Coins are collected. 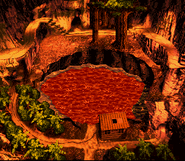 Krematoa after all of the Cogs are collected.