Start a Wiki
Krem Quay is the third world in Donkey Kong Country 2: Diddy's Kong Quest inside of Crocodile Isle. The area is a dark polluted swamp with a very large broken shipwreck where originally K. Rool was pirate, before he became king.[1] Glimmer makes his only appearance in this world. Kudgel is the boss here. This is one of the two worlds in Donkey Kong Country 2: Diddy's Kong Quest to have a scrolling map, the other being K. Rool's Keep.

This world, along with Crocodile Cauldron did not make an appearance in Donkey Kong Land 2 unlike all the other worlds in Donkey Kong Country 2: Diddy's Kong Quest. However, the two worlds were merged into a new world, Krem Cauldron. This is because of system limitations to the Game Boy.

This first stage of Krem Quay is a swamp stage. Early into the stage, a rotatable barrel can be found. The timer indicates how much time is remaining until the barrel must be shot, and in that time players can aim the barrel. It can be shot early, though. Various parts of the stage consist of manually needing to aim the barrel and fire it so the Kongs will land in the next barrel to the right in order to advance. The task is fairly easy at first, though a few parts seem like parts of Barrel Cannon Canyon from Donkey Kong Country. There are twenty one Krocheads total in this stage.

As the title suggests, Glimmer is featured in this stage, in a large sunken galleon. The area is poorly lit, and most areas are barely visible. Follow the trail of Bananas until Glimmer pops up. He is a very valuable asset, as his light will provide a great guide through the sunken ship. Bananas shaped like arrows will also show the Kongs the right way.

On the stage map, this stage takes place right in the middle of the swamp, and so it does. Apparently taking place during mid-day, this swamp stage focuses much more and climbing on Cattails that have grown above the swamp's water, and jumping from platform to platform. There is not much ground, some areas require Kongs to time their jumps and landing precisely so they do not collide with Kaboings or Zingers. Krocheads will also provide help by acting as a makeshift platform, though they do not stay forever.

This stage takes place on a floating galleon, with a remixed theme of K. Rool's theme from Donkey Kong Country. Rattly appears in an Animal Barrel early in the stage to be playable through the stage. Kannons, Kaboings, and Zingers that Rattly can jump on are found throughout the rather long stage. The main aspect of the stage is to take advantage of Rattly's ability to jump high and hop off enemies to get to get through the stage.

Taking place on a sinking galleon at nighttime, this stage is often considered very annoying. Diddy and Dixie need to climb up a galleon that is taking on water and sinking fast. The water level doesn't seem like a problem at first, but a nasty and invincible enemy lurks below, waiting for the Kongs to trip up or lag behind enough to strike. Be nimble and try to be safe in this stage.

Bramble Blast is famous for it's very unique and memorable background music, but also for it's stage design. The stafe takes place in a giant area of brambles (supposedly in a higher area of a forest) with many Barrel Cannons that the Kongs must blast through from barrel to barrel in order to get through the stage. Though there are only four angles of fire, if the angle is off, it usually leads directly into deadly brambles. At times this gets frustrating, though fans have said that the good music helps encourage continues.

The area guardian stage, Kudgel is a gray color swap of Klubba, keeping the deadly club and apparently having a better jumping ability. Kudgel often jumps, and lands with an earthquake that will stun grounded Kongs. Jump to avoid the earthquake, and be aware of his long-ranged club swing after a set series of jumps. Throw a TNT Barrel at him to damage him. Rinse and repeat, and note the faster pacing as the battle goes along. 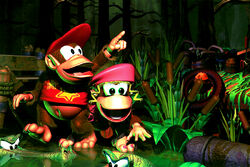 The overworld view of Krem Quay. 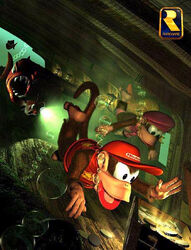 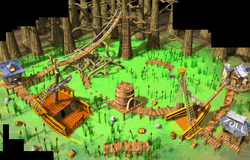 The overworld view of Krem Quay in Game Boy Advance 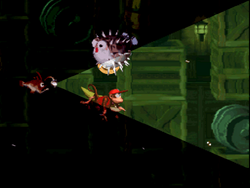 A Puftup has puffed over the banana coin after rising.

Retrieved from "https://donkeykong.fandom.com/wiki/Krem_Quay?oldid=59239"
Community content is available under CC-BY-SA unless otherwise noted.