In the opening cutscene of both games, after the volcano in the Donkey Kong Island erupts, and the Tiki Tong Tower emerges, many tikis are released, including Krazy Kalimba. The tiki sees an elephant and hypnotizes the animal, and many others, to steal all bananas in the island. After realizing his banana hoard is missing, Diddy Kong goes after the hypnotized animals. Later, as soon Donkey Kong leaves his treehouse, he also realizes the banana theft, but Krazy Kalimba sudden arrives and tries to hypnotize the primate to do its bidding, only to discover that he was somehow immune to the hypnosis. Kalimba is then left at Donkey Kong's mercy, who gives it a beatdown before sending flying out of his treehouse far into the jungle.

Krazy Kalimba later appears in the boss level, Mugly's Mound, in the Jungle world, where the expression on the tiki's face suggests it is angry about being punched out of Donkey Kong's treehouse. It hypnotizes and possesses Mugly to attack Donkey and Diddy Kong. The boss battle against Mugly involves that Kongs jumping on the creature's back three times per phase. If done successfully, the creature will become enraged and go into its second phase, making it look orange instead of yellow. In the third phase, he turns red. Mugly is eventually defeated after receiving a total of nine hits, and he will pass out. Krazy Kalimba will leave the creature's body and stay dizzy for a few moments. The player has the option of jumping towards the tiki, beating Krazy Kalimba multiple times and sending it flying yet again. If the player chooses to wait, the Tiki Tak Tribe leader will recover and leave by flying away towards the screen.

Despite its defeat, that is not the end for the tiki, because it can later be seen with all the other Tiki Tak Tribe leaders during the final boss battle, where they help Tiki Tong by turning into hands for it. When the Kongs destroy Tiki Tong's hands and defeat the boss, Krazy Kalimba is also destroyed for good presumably.

Krazy Kalimba has blue and red markings on its right to left side of its body. It also has rather sharp looking claws, opposed to the other Tiki leaders. It also has an unknown symbol in the middle of its head, which is three arrows pointing downward. The tiki has what appears to be a headband along with many wooden stakes appearing from the top its forehead, which also have symbols. The headband has a yellow one, along with two smaller red bands. The two ending sticks of its head glow blue and red, which is a neat detail, judging by how bright the paint on its face is. One small detail about Kalimba is that its middle loop on the bottom of its face is smaller than the rest. 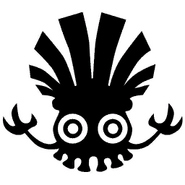 Krazy Kalimba's silhouette always seen at the screen when the Kongs are defeated in any levels of the Jungle world in both games. 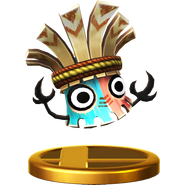 Krazy Kalimba's trophy as seen in the game Super Smash Bros. for Wii U.