Krashes are Mine Cart-driving Kritters that first appeared in Donkey Kong Country. Krashes can be a real hassle, as they have no concern for their own safety.

In Donkey Kong Country, Krash's attack patterns consist of riding their mine cart in the opposite direction the Kong's mine cart and run into them. The only way to avoid them is to jump over them. Krash appeared in both mine cart levels in the game, either posing as kamikaze-like enemies or stationary in their main carts. When stationary, they could be jumped on to remove them from the cart they were in and make the cart rideable. Krash's most famous appearance was likely at the end of Mine Cart Carnage where a surprise one was found very close to the end.

In Donkey Kong Country 2: Diddy's Kong Quest, an enemy similar to Krash, called Klank, appears. Major differences include instead of a Kritter piloting the cart, a Kutlass does, the carts are different and are called "skull carts". Klanks can also found racing against Diddy and Dixie, and can also throw a Wooden Barrel projectile.

Krashes also appear in Donkey Kong 64 in the game's Mine Cart tracks. The Krashes in this game are much more muscular and use a club, which they try to smack the Kong with. If they succeed in doing damaging the Kong, the Kong will lose coins. These Krashes can be defeated by causing them to crash into something such as a pile of rocks. Usually, a Kong would have to pull a lever to drop something into a Krash's path. 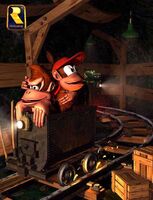