Kopters carry helicopter blades in each hand and fly by spinning them rapidly. If either Dixie and/or Kiddy get too close, they will end up getting hit by Kopter's blades. Kopters also wear crash helmets rendering jump attacks useless. However, in Donkey Kong Land III, if the Kongs can land directly on their helmet, they will bounce off to a greater height.

Kopters first appear in Donkey Kong Country 3: Dixie Kong's Double Trouble! as invincible enemies. In Donkey Kong Land III, they can be defeated if the player jumps on their heads. They respawn when the Kongs aren't on the same screen as them, if they touch the bottom of the screen.

A Kopter with slightly different armor (as well as a helmet fused with copter blades) appears in Donkey Kong Barrel Blast, having the same stats as Wrinkly Kong, as well as being her rival. In this game, he looks more like a Kremling, having greener skin and a tail. 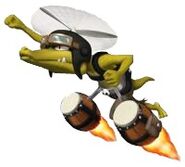