Kong Kollege is run by Wrinkly Kong in the game Donkey Kong Country 2: Diddy's Kong Quest and Donkey Kong Land 2, and visitable in every area except the Lost World.

In Kong Kollege, Diddy and Dixie Kong can save their progress and get hints about the world's boss, Animal Buddies, or enemies that are seen in the world. When this area is first accessed, saving will be free, but from then on, saving will cost two Banana Coins (one in the Japanese version).

In the Game Boy Advance remake, saving is not an option in Kong Kollege, as the player can rather do so on the menu. It is also where she gives the Kongs "homework" by giving them a scrapbook to collect enemy snapshots in the Game Boy Advance version. Every completed page yields one DK Coin.

As with the other Kong-operated areas, the background will not change when used in different areas- it will always be the bright, sunny background in every single area. In the Game Boy Advance version, however, the theme of the outdoors match where the world is at.

In Donkey Kong Country 3: Dixie Kong's Double Trouble!, Wrinkly has given up her job as a teacher and is at her Save Cave with no tips available, but still saves the game. In the Game Boy Advance remake, she is a caretaker who has her own Retreat, and cares for banana birds Dixie and Kiddy collect throughout the game.

There are a multiple amount of Easter eggs in Kong Kollege. They are as listed: 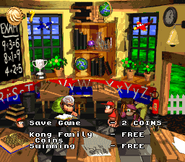 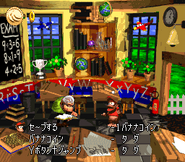 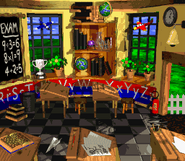 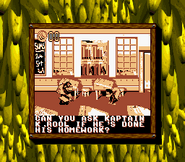 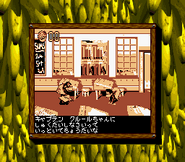