A Kong is a unique anthropomorphic species consisting of various different primates resembling either apes (i.e. gorillas, chimpanzees, orangutans, gibbons), or monkeys (such as spider monkeys or baboons), they are capable of human speech and constructing houses. The Kongs willingly wear clothes and some even have hairstyles.

The term "Kong" is also generally used to describe the primate species, it's not a surname, similar to other Mario species such as Toads (i.e. Yellow Toad and Blue Toad). For the most part, the Kong Klan all live on Donkey Kong Island. However, Kongs that are not affiliated with the Kong Family live in other lands, such as The Fruit Kingdoms, Sun Sun Island, or the Mushroom Kingdom. The Kongs are often plagued by the crocodilian reptiles known as the Kremlings, the extra terrestrial magical pig named Wizpig, sentient hypnotizing wooden instruments with bee-like behavior dubbed the Tikis, and home-seeking vikings called the Snowmads.

Concerning their lifespans; Kongs are primarily shown to age drastically faster than humans and even faster than their supposed real-life counterparts (explaining why Mario and Pauline don't appear to have aged; another possibility is that it's because of Mario's constant consumption of 1-Up Mushrooms), examples include Cranky going from middle aged in the arcade games to elderly in DKC.

Junior was seemingly youthful in Donkey Kong Jr. and Donkey Kong Jr. Math and is an all grown up Kong in Super Mario Kart and Mario's Tennis (Virtual Boy) as he's now classified as a Heavyweight.

As for Tiny, she is a child with a shrinking ability in DK64, whereas in Diddy Kong Racing DS, she had a growth spurt, becoming fully grown and is a fully developed adult, compared to her elder sister Dixie who is already fully grown and/or she inherited the "short gene" from her parents whereas Tiny inherited the "tall gene", similar to Luigi being the taller yet younger twin brother compared to Mario who is the older yet shorter twin brother.

Furthermore, Kongs having a shorter lifespan than humans consequently means they reach the mature age and mindset of wanting to sire a kid faster than humans as well, meaning they give birth to children relatively young; reminiscent to real-life primates. For example DK Junior in his first starring appearance would have already been old enough to find a female to give birth to his son: the new Donkey Kong.

While it is common that most Kongs appear to be apes, it seems that Kongs such as Diddy resemble spider monkeys, and other simian figures, in rare cases. A likely explanation is that for Kongs "ape genes" are more dominant traits while "monkey genetics" are recessive traits. Baby Donkey Kong has a short monkey tail that (because of his young age) has yet to grow despite the youngling seemingly looking closer to that of a gorilla (alternatively, Donkey has an ancestor that happened to bare a resemblance to a monkey and the genes skipped generations).

Kongs have been seen traveling to places like the Mushroom World, they are known to surf, drive, manage museums, and have many more connections to humans such as doing mathematics and living in the city.

In Donkey Kong Country 3: Dixie Kong's Double Trouble!, Dixie Kong and Kiddy Kong are simply referred to as Kongs by various characters when they are together, like the quintet of the Kong Family in Donkey Kong 64 are called Kongs by Snide or the Kong Krew.

Entrance of the Kong temple 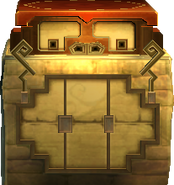