Koin, also known as Commandeer Koin[1], is an armored Kremling enemy encountered inside most of regular stages of the games Donkey Kong Country 3 and Donkey Kong Land III. The enemy acts as a guardian of most of the DK Coins in both games.

Prior to the events of Donkey Kong Country 3, Koin assembled the Koindozer Klan through his cousins[2] in the Northern Kremisphere after the fall of the Kremling Krew by months.[3] Koin and his cousins, along with other Kremling remnants, are now under the command of a new master, KAOS.[4]

In Donkey Kong Country 3, Koin appears in every regular stage. However, in Donkey Kong Land III, the enemy is not found inside coral cave stages because they are completely underwater. The Koin is usually found near the beginning or the end of a stage in both games. Inside stages, if the Kongs approach the Koin, he will simply push them away with his shield without harming them. If they attempt to jump on him, he will simply raise his shield, allowing the primates to stand on it safely. Koin is immune against most of the attacks, including TNT Barrels. Fortunately, Koin has a weak spot: his back. Dixie and Kiddy Kong can defeat the Koin by picking up a Steel Keg and throwing it in order to make the barrel to hit the back of the Kremling. To do this, they usually must throw the Steel Keg over it, which will then rebound off a wall, and hit the Koin in the back, defeating him. In similar way, it is also possible for the heroes to step over the Koin's shield and throw the Steel Keg, hitting both unprotected sides of the enemy. Usually, inside most of the regular stages of both games, there is an unlimited supply of Steel Kegs nearby the enemy for the Kongs to use. In Donkey Kong Country 3, after throwing a barrel, another Steel Keg will appear on the same spot immediately after the first one is gone. In Donkey Kong Land III, if the player needs another Steel Keg, they must move away from the spot where the barrel is first found, leaving it out of the screen, and return to it for another barrel to reappear.

However, sometimes, the player must find more elaborate ways of defeating the Koin. During some stages in Donkey Kong Country 3, Koin can only be defeated with the assistance of Bazukas, small Kremling enemies that shoot barrels. Most of the time, a Switch Barrel must be toggled by the heroes in order to change the barrels shoot by these enemies into Steel Kegs.[1] In other occasions envolving the same enemy type, the player must take control of Squitter the Spider and create web platforms near the Koin, providing some surface for the Steel Kegs shoot by the Bazuka roll down towards the armored enemy. Inside some stages, the Steel Keg required to defeat Koin is obtained by bringing an Animal Buddy past the No Animal Sign. In these cases, the primates only get one chance to defeat Koin. If they fail, the player must replay the current section or entire stage to get another chance.

Koin is a green Kritter with yellow belly and rounded iris. He wear bucket with white human jolly roger on his head and carry a trashcan lid as shield. A Koin, still carrying a DK Coin, will display the golden coin over his shield.

Alternative artwork of Koin from the game Donkey Kong Country 3. 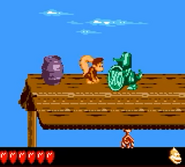 Dixie and Kiddy Kong throwing a Steel Keg at Koin as seen in the game Donkey Kong Country 3 for GBA.