In Donkey Kong Country 3: Dixie Kong's Double Trouble!, Knockas are fairly common enemies, encountered in many levels. Knockas attack the same way a green Klobber would; disguised as barrels, they wait to pop out at the player and then attempt to shove the Kongs in a certain direction. They function identically to a green Klobber, though their disguise is much less convincing.

A Knocka can be defeated by simply jumping on it as this will knock it back into its Barrel and stun it. Once back in its Barrel, a Knocka can simply be picked up and thrown; but be warned, though, because it will respawn very quickly if its location of origin goes offscreen and then back on.

In the later levels of Donkey Kong Country 3: Dixie Kong's Double Trouble!, two Barrel-wearing sub-species of Knockas are encountered. Klasps are an orange variant with their Barrels full of dynamite who clasp tightly on ropes. These will either swiftly climb back and forth on a rope in a set path, or attempt to chase down any Kong who is on or near their rope, exploding on contact. Kuchukas wear purple Barrels and are stationary, but hurl bombs in a set pattern.

In the Game Boy Advance version of the game there is a subspecies of Knocka called Krackas who were previously scrapped from the Super Nintendo Entertainment System version of the game. They appear only in a Pacifica level, Stormy Seas. 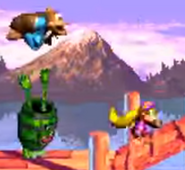