Not to be confused with the item Kannon from the games Donkey Kong Country 2 and Donkey Kong Land 2.

"Serving you, King K. Rool, is my life!"
—Klump in the episode "Klump's Lumps" from the Donkey Kong Country animated series

According to the Donkey Kong Country animated series, Kaptain Skurvy is his long lost older brother.

In the game Donkey Kong Country, Klump is an obese Kremling with purple-ish scales and a yellow belly. He wears a green military helmet with three yellow chevrons, a green belt with five pockets and black laced boots. He had a similar appearance in the DKC TV series, except his scales were green.

In Donkey Kong Country 2, as Kannon, Klump wears a black pirate hat with a white human skull and cross-bones, a black eyepatch on his left eye, hoop earrings, a brown belt with a gold buckle and brown leather boots.

In Donkey Kong 64, Klump has pink scales and wears a yellow shirt with a military helmet and belt once again, along with black boots.

In Donkey Kong Barrel Blast, Klump has brown scales and wears a wooden bucket on his head and green trousers.

Klump first appears in the game Donkey Kong Country. He along with other Kremlings stole the Kongs' Banana Hoard and knocked out Diddy Kong, in which Klump had him sealed in a barrel. Klump and the Kremlings take all Banana Hoard in his industrial base and send them to the Gang-Plank Galleon later.[7][3]

In the game, Klump wears an army helmet to protect his head. Because of this, he is immune to Diddy's jump attacks. He can be defeated by other methods, like Rambi the Rhinoceros' horn, a rolling attack (by Donkey Kong)/cartwheel (by Diddy Kong), or from a barrel tossed at him. Unlike Diddy, Klump is vulnerable to DK's jump attack, but in the game beta, he also ricochets off Klump's helmet. Klump appears in six stages: Jungle Hijinxs, Torchlight Trouble, Trick Track Trek, Elevator Antics, Blackout Basement and Platform Perils.

In the Gang-Plank Galleon's fake credits cutscene, Klump is in charge of the game's "KONCEPT".

In the Game Boy Advance version of Donkey Kong Country, the Kong Family obtain a Klump's photograph when Donkey Kong uses his Hand Slap move on the enemy.

Klump reappears again in the games Donkey Kong Country 2 and Donkey Kong Land 2 as his new pirate alias Kannon. Kannon attacks by firing wooden barrels and/or Kannonballs at the Kongs in the direction he is facing, which can be either left, right, or downward. Kannon can be found in several stages, but mostly underground areas. He also has a stage named after him, Kannon's Klaim. Despite being large and burly, Kannon does not have his helmet, being easily defeated by jump attacks on the head.

Klump reappears in the game Donkey Kong 64 ordered by King K. Rool together with Kasplat and Chief Technician to imprison DK's family and steal his bananas. Klump shows K. Rool that he already fulfilled his two requests.

When the primates are nearby, Klump attacks by tossing explosive Orange Grenades at the heroes. His bulk body protects him from all Kongs' regular physical attacks, making them to bounce back. Klump is either defeated from the shockwave attack, an Orange Grenade, or a musical instrument move. When the heroes are far away, Klump will patrol at certain location, and he will often stop, consume a single Orange Grenade and burp afterward. When defeated, Klump spins around, makes a military salute and collapses. He then will relinquish three Orange Grenades for the heroes to collect.

Klump appears in every level of the game, except Frantic Factory and Creepy Castle.

Klump is an unlockable playable character in the canceled game Diddy Kong Pilot. In unfinished builds of the game, he, Kritter, Klap Trap and King K. Rool are members of Team Kremling, the rival team of Team Kong and Team Cranky. The entire team is unlocked if the "Single Player" mode is completed by Team Kong.

Klump is an unlockable playable character in the game Donkey Kong Barrel Blast. He is unlocked if stage 2, Mission 16 of Candy's Requests is completed. His rival is Lanky Kong, who he shares near-maximum speed, low boost, and minimum agility with. His barrel rocket resembles his helmet and he attacks with full-frontal knee kicks. He is shown having a stand-off with Kritter, Kass, and Kalypso against their respective rivals in the Kong Family during the Single Race scenario, though he is not glaring at Lanky. He also is present along with Kritter and Dixie Kong as Candy Kong is choosing who will participate her challenges, Candy's Challenges. Unlike Kritter, he is not aggravated by Dixie's antics.

"Klump is quite a character. He's like a big, overweight drill sergeant. He's not fast — how could he be? He waddles along like a duck, blocking every ape in his path. Donkey Kong has no trouble putting Klump out of his misery, but here again, lack of size counts against Diddy as he has to hit Klump twice to off him. If Diddy jumps on Klump's head, Klump will back up and prepare for battle. Diddy can then just do a powerful cartwheel right through him."
—Donkey Kong Country Player's Guide (SNES version), page 13

"Klumps are the slowest Krocs, but also some of the toughest. Donkey Kong can take out the overweight Klumps with one jump. Diddy, however, has to roll into the Klumps to take them out."
—Donkey Kong Country Player's Guide (GBA version), page 14

"Kannon is a barrel-chested baddie who speaks softly and carries a big...well, cannon! He's got an unlimited supply of ammunition, and he's perfectly happy just standing in one place, blasting away until the Kremcows come home! He doesn't pause very often, but there's usually a pattern to his cannon fire."
—Donkey Kong Country 2: Diddy's Kong Quest Player's Guide (SNES version), page 14

"If they can see you, these loyal minions won't hesitate to throw a grenade at you. If you too close, they also can throw their bellies into you. Toss an Orange toward it to get rid of a Klump. After saluting, it will leave behind three Oranges."
—Donkey Kong 64 Prima's Official Game Guide, page 16

General Klump (also known as Klump or Klumpy) was King K. Rool's second-command and general in the Donkey Kong Country animated series, where he was one of the main characters.

Despite being constantly berated and disrespected by K. Rool (even being fired a few times by him) for his thick-headedness, Klump remained ever faithful to him, even stating in the episode "Klump's Lumps" (which was centered around Klump being fired) that serving K. Rool was his life. It is perhaps due to his loyalty (or possessing better tactical than K. Rool's other high-ranking minion, Krusha), Klump was oftentimes put in charge of K. Rool's various plots and schemes.

Despite his tough military-man like exterior, Klump was, in actuality quite a softy. He actually befriends Dixie Kong when K. Rool fires and exiles him in the aforementioned episode, "Klump's Lumps", managing to keep reinstated rank when the king takes him back while not betraying her kindness and finding her pet lobster Thermador.

According to Klump during the episode "Speak No Evil, Dude", he is immune to illness due to the fact that he eats at least one hundred garlic cloves a day. This prevents him from contracting the lethal Kongo Bongo Gone Wrongo disease from Diddy Kong and Krusha.

Much of Klump's origin was revealed in the Christmas-themed episode "The Kongo Bongo Festival of Lights". This episode reveals that as a young kid, Klump ended up causing a huge fire which devastated the swamp where he and his family lived. Klump's older brother, revealed to be the infamous pirate and King K. Rool's rival in the bid for the Crystal Coconut, Kaptain Skurvy, in a show of brotherly love, decided to take the blame for Klump. This resulted in Skurvy's banishment from the home swamp. Klump only recalled vague memories of these events until Skurvy revealed everything to him. The end of the episode reveals that Klump had planned on joining Skurvy's crew, much to the protest of King K. Rool.

In the English version of the animated series, Klump was voiced by Adrian Truss.

In the adaptation of Donkey Kong Country, written by Michael Teitelbaum, Klump appears as one of King K. Rool's Generals, along with Krusha, Kritter, and Rockkroc. Klump appears to lead the assault to steal the banana hoard, much like in the game. Diddy Kong tries to stop him, but is captured and put inside a barrel. Klump is next seen in the last chapter on board the Gangplank Galleon, along with K. Rool, and the other three Kremling Generals. Diddy Kong ends up fighting Klump again. This time, instead of doing a jump attack, Diddy performs a cartwheel spin, knocking him off of the ship, and into the water below.

Klump's artwork from the game Donkey Kong Country for SNES. 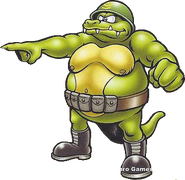 Klump's sprite from the game Donkey Kong Country for GBA.

Kannon's animated sprite, staring down and shooting, from the game Donkey Kong Country 2 for SNES.

Klump's model from the game Donkey Kong 64 for Nintendo 64.