Klubba is a very powerful Kremling who lives in Crocodile Isle. He runs Klubba's Kiosk, the only known entrance to the Lost World.

Klubba was hired by Kaptain K. Rool to stop the Kongs from entering the Lost World, K. Rool's secret hideout and energy source of the island. He guards the golden barrels found in every world (except the Gangplank Galleon, The Flying Krock, and of course, Lost World, itself). Despite this, he can be bribed fifteen Kremkoins to allow the player to enter the Lost World.

When approached in his Kiosk, Diddy and Dixie Kong have three choices: To pay up the coins, fight him (which always results in a loss) or run away. The latter two are essentially the same, returning to the map screen. In the Game Boy Advance remake, a fourth option called "Bag a Bug" was added, which was a short minigame costing five Banana Coins. After paying him, however, he will happily let them into Lost World without the choices, being incredibly friendly to the Kongs afterward and going so far as to call them 'friends' and polishing the bridge just for them. One of his lines mentions that if the Kongs were to ever get into trouble, he will help them out at their time of need. At one point Klubba even tells the Kongs that Kaptain K. Rool treats him and the rest of the minions rotten, and hopes the Kongs will thwart his plans, hinting that Klubba doesn't show any hatred towards the Kongs.

In Donkey Kong Land 2, Klubba reprises his role as guardian to Lost World however he only appears near Gloomy Gulch and must have all forty seven Kremkoins paid for access to Lost World. 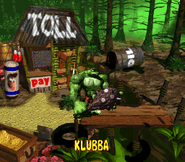 Klubba in the Credits screen. 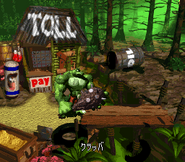 Klubba in the Credits screen in the Japanese version. 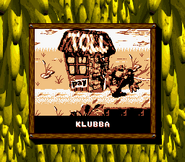 Klubba in the Credits screen in Donkey Kong Land 2.

Playing as Klubba with the Castle Crush Glitch.