Klobbers are members of the Kremling Krew that wear Barrels. Their first appearance was in Donkey Kong Country 2: Diddy's Kong Quest, where they were common enemies.

Klobbers first appear in Donkey Kong Country 2: Diddy's Kong Quest as common enemies. Klobbers will hide in their barrels and wait for Diddy or Dixie Kong to approach, then spring out of their said barrels and continuously run at either Kong to bop them around with the barrel itself. The basic green Klobber will not injure a Kong unless it pushes them into another baddie, though their usual goal seems to be to knock Kongs off of cliffs. The Kongs can knock a Klobber unconscious by bonking it on the head (either by jumping on it or throwing something at it). After a Klobber is knocked out the Kongs can use the barrel as a weapon. Sometimes Klobbers will run off the edge of an abyss, just by chasing a Kong.

A yellow version of Klobber also exists. These yellow Klobbers use the same strategy as the green variety (hiding in a Barrel and charging recklessly when the Kongs approach). The major difference between the green and yellow Klobbers is that the yellow variety can make the Kongs drop their collected Banana Bunches.

Dark grey or "black" Klobbers with red eyes exist as well. These Klobbers are the most dangerous. Whenever they hit the Kongs, they cause them to drop an Extra Life Balloon. The majority of grey Klobbers are found in the Lost World.

Red Klobbers (known as Kabooms) also make an appearance. However, they hide in TNT Barrels instead of regular barrels and explode whenever they make contact with any Kong directly, however, bonking them on the head will stun them as with any Klobber, and then the TNT barrel can be used as if it were normal.

Green Klobbers and Kabooms also appear in Donkey Kong 64. Here they are uncommon enemies, found only in Angry Aztec, Gloomy Galleon, and certain areas in Crystal Caves. This time, Klobbers actually do hurt the Kongs when they run into them. They were also immune to almost all of the Kongs' attacks. However, a shockwave attack, an instrument, or an Orange Grenade can take them out. Kabooms can be taken out with a single shot from a gun. Any enemies close to Kaboom (generally Klobbers) could be hurt by the explosion.

Klobbers also appear in Donkey Konga 2. Klobbers most recently appeared in DK: Jungle Climber, where they are uncommon enemies since two only appear in Spooky Woods, and can climb on pegs and try to bounce into the Kongs. 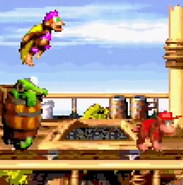