"Look out below! Klinger climbs around in the rigging, ready to slide down on anyone below him."
—Donkey Kong Country 2: Diddy's Kong Quest Instruction Booklet (SNES version)[3]

Klingers are Kremling enemies who have the ability to climb up ropes and then skid down quickly at regular intervals. They first appear in the games Donkey Kong Country 2 and Donkey Kong Land 2.

Despite not being considered natural climbers[4], Klingers are usually featured in stages of the Crocodile Isle in Donkey Kong Country 2 containing vertical ropes, vines, cattails[1] or chains, including the Gangplank Galleon stages Mainbrace Mayhem and Topsail Trouble, the Krem Quay stages Krockhead Klamber and Slime Climb, the Krazy Kremland stage Mudhole Marsh, the K. Rool's Keep stages Chain Link Chamber and Toxic Tower, and the The Flying Krock stage Screech's Sprint. The behavior of these enemies is to climb up single short sections at certain speed, quickly slide down soon after reaching the top and repeat the process. While sliding down, they will also release a loud noise. If Diddy and Dixie Kong have to progress by climbing, the Kongs must avoid contact with Klingers on the way. It could be accomplished by using good timing and moving under these enemies. Klingers can be defeated by the primates jumping on their heads, it being easier to pull off when the enemies have reached the top of rope sections. They can also be defeated by the heroes throwing single barrels, crates, treasure chests, Kannonballs or Click-Clacks at them. Klingers can also be harmed by projectiles attacks from Animal Buddies, such as Squitter the Spider and Squawks the Parrot. Using the "team-up" move on the ground to throw the secondary character at Klingers will take the enemies down upon contact.

At the opening cutscene of the Game Boy Advance version of Donkey Kong Country 2, when the Kaptain K. Rool uses The Flying Krock to fly over the beach of the Donkey Kong Island, just before Donkey Kong being kidnapped, many Klingers are seen sliding down on two vertical ropes deployed by the airship. The enemies appear to drop down on the jungle of the island.

Klingers reappear as regular enemies in Donkey Kong Land 2 displaying patterns no different from Donkey Kong Country 2: climbing up on vertical ropes or similar structures, and sliding down soon afterwards. Here, they are also featured in the Krem Cauldron stages Krockhead Klamber and Slime Climb, and the K. Rool's Keep stage Dungeon Danger of the Crocodile Isle. Direct contact with Klingers usually must be avoided, and they are still vulnerable against jump attacks, single objects thrown at them or projectile attacks from Animal Buddies. Oddly, it is possible to defeat Klingers by the Kongs simply moving into them horizontally when climbing on parallel ropes, with the primates suffering no harm in the process.

Klingers make appearances in the music/rhythm game Donkey Konga 2, showing up during the Freestyle mode when the DK Bongos are hit.

Klingers appear to be Kremlings in green pirate gear with white spots on them, it being more evident in official artworks. They have yellow bellies and are overall possessed with an orange coloration. They also possess sharp white claws. In official artworks, Klingers also appear to hold a knife in their mouths. They also, unlike most Kremlings, have ears and earrings, it being not depicted in-game sprites. 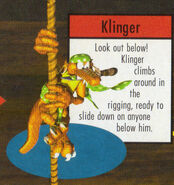 Diddy Kong jumping over a Klinger, as seen in the game Donkey Kong Country 2 for GBA.

Sprite of Klinger climbing on a chain, from the game Donkey Kong Country 2: Diddy's Kong Quest for SFC/SNES.

Sprite of Klinger climbing, from the game Donkey Kong Land 2 for Game Boy.

Sprite of Klinger climbing, from the game Donkey Kong Country 2 for GBA.