Klasps are Kremlings who hide in TNT Barrels. They only appeared in Donkey Kong Country 3: Dixie Kong's Double Trouble! and Donkey Kong Land III. The only difference is that in Donkey Kong Land III, they always moved in a fixed pattern instead of actively seeking out prey. They first appeared in the third level of Cotton-Top Cove, Kreeping Klasps, but they were also seen in a few mountain levels, such as Krevice Kreepers and Criss Kross Cliffs.

They hang from ropes, going back and forth. In Kreeping Klasps, they follow a set path instead of chasing Dixie or Kiddy Kong at all. Starting in Krevice Kreepers however, when they see a Kong, they'll attempt to chase the apes whenever they're anywhere near their rope. They would be but a minor irritation if not for the fact that the barrels they live in explode on contact. Thus, any Kong near one of these should take all care to vacate the premises before a violent explosion ensues.

Klasps can't be defeated by anything. Therefore, they should be avoided if all possible. Although, they do take themselves out when they do explode.

In the Game Boy Advance remake of Donkey Kong Country 3, a ground-bound version of Klasps named Krackas appear. While Krackas resemble Klasps and explode like them, they have the attack pattern of a Knocka. 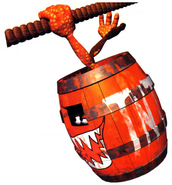