Klaptraps are small Kremling enemies that first appeared in the game Donkey Kong Country. They are crocodile-like creatures with large mouths (hence the name).

The Klaptraps are quadrupeds, have huge mouths with sharp teeths and four legs. In the game Donkey Kong Country, the common Klaptraps' trademark is the yellow stripes on the back. They come with a variety of colors on their scales, such as blue, purple, green and red. They mainly appear blue with yellow spots.

In the game Donkey Kong 64, Klaptraps are completely green or purple, and their mouths are proportionally smaller to their counterparts in Donkey Kong Country.

This subspecies is physically smaller to the Kremling species as shown in several games, where they are trained by the dominant subspecies Kritters. Like most Kremlings, the Klaptrap subspecies probably originated on the Crocodile Isle.

The Klaptraps have a mouth full of sharp teeth that it uses these teeth to harm the Kongs. In Donkey Kong Country, purple Klaptraps that are more formidable, since they have the ability to jump once Donkey Kong or Diddy Kong jumps, but they can be defeated by trampling, or by being hit by anything throwable, such as barrels. Blue and purple Klaptraps are also immune to roll attacks, instantly harming the heroes if they try to use the move. However, a well timed Hand Slap executed by Donkey Kong can still defeat these enemies.

In Donkey Kong 64, Klaptraps are regular enemies in the game. They will patrol around at the same area, and they will regularly stop, growl and bite. If the Kongs approach them, the enemies will become agitated and pursue the primates, trying to bite them. The Klaptraps can be defeated by any Kongs' physical attacks, weapons or musical instruments. However, after receiving a single hit and being defeated, the Klaptraps will always leave some leaping toothing behind. The toothing will follow the heroes to harm them until the primates break them or lead them towards pits or hazards.

Also in the game, several Klaptraps provide other types of service, for example: a purple served to drive K. Rool's Mobile Island Fortress, half of them were used by King K. Rool to not let his minions escape their duties, and even a giant was held by the crocodilian dictator to punish them.[1][2] Inside some Bonus Stages in the game, the player will take control of a Klaptrap to able scare certain number of Gnawties and make them to fall into a hole at the center of the room within a time limit, in order to receive a Golden Banana.

Artwork of Klaptrap from the game Donkey Kong Country. 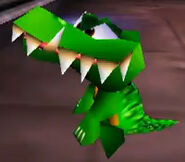 Klaptrap as seen in the game Donkey Kong 64 for Nintendo 64.

Animation of green Klaptrap from the game Donkey Kong 64 for Nintendo 64.

(Large) animation of green Klaptrap from the game Donkey Kong 64 for Nintendo 64.

Klaptrap's trophy as seen in the game Super Smash Bros. Melee for Gamecube.