In Donkey Kong Country 2, Klanks are present in the rollercoaster stages Target Terror and Rickety Race of the world Krazy Kremland.

In Target Terror, two Klanks will appear at two points of the stage. The enemies run at the same direction of the Kongs, and on the same tracks in front of them. Each enemy will just throw some barrels at the primates, which the player must avoid by jumping over them. These Klanks will eventually fall into pits. It is not possible for the heroes to catch up with any of them.

During the stage Rickety Race, the Kongs must race against nine Klanks while traversing tracks and avoiding pits. The player can earn new places in the race by defeating the Klanks or simply going past over them. The racers can be defeated by the heroes using their Skull Cart to jump on them. Usually, colliding against these enemies will only push them a bit and expel single bananas out of them. The Klanks will also carry items with them, such as single bananas, banana bunches and Banana Coins, which are collected by the player when they defeat these enemies. In the Super Nintendo Entertainment System version of Donkey Kong Country 2, the Klank at the third place holds the "N" of the K-O-N-G Letters. In the Game Boy Advance version of the same game, the Klank at the second place carries the same letter, instead. In both versions of the same game, the Klank at the first place carries the DK Coin of the stage. Also in both game versions, if the player holds the "Left" button just after the racing lights have started the race, the Kongs will reach a hidden Plus Barrel which will provide a speed boost for their Skull Cart during the entire race. In the SNES version of Donkey Kong Country 2, this barrel provides much more speed for the Skull Cart, even allowing the player to defeat Klanks by colliding against them on down hill sections of the tracks.

Inside the only Bonus Room of the stage Rickety Race, accessible by using the Team-Up move to throw a secondary Kong and reach high platforms above the beginning of the stage, the primates must ride a Skull Cart and collide against or jump on Klanks moving at the opposite direction on multiple tracks. By defeating at least five of them, the player will earn a Kremkoin.

In Donkey Kong Country 2, Klanks come in a variety of colors, which includes pink, light blue, orange, yellow/light green and dark green. Their color does not affect how they move or attack.

In the game Donkey Kong Land 2, Klanks only appear in the stage Rickety Race of the world Krazy Kremland. Here, the primates must race against five Klanks, while avoiding pits and Zingers flying over the tracks of the stage. The Klanks will provide no items for the heroes, even if the player uses the Skull Cart to collide against or jump on them. However, some of these enemies can demonstrate bad riding skills of their Skull Carts by sometimes falling into pits, situation which never happens in the same stage of Donkey Kong Country 2. If the player is able to finish the race at the first place, a DK Coin will be waiting for them at end of the stage, just before the End of Stage Target. 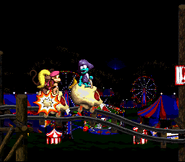 Dixie and Diddy Kong colliding against the Skull Cart of a light blue Klank and earning a single banana, as seen in the game Donkey Kong Country 2: Diddy's Kong Quest for SNES.

A light blue Klank throwing a barrel at Dixie and Diddy Kong, also riding a Skull Cart behind the enemy, as seen in the game Donkey Kong Country 2 for GBA.