"It was Dixie who found herself lumbered with this little cousin on her most recent escapade, during which Kiddy proved that the traditional Kong adventuring abilities (not to mention sheer brute strength) still run in the family. He's as wary of Kremlings as you'd expect for a kid of his age, but once he gets frustrated it's the Krems who'd better watch out..."
—DKC Trilogy Cast List[1]

Kiddy Kong (ディンキーコング, Dinky Kong in Japan) is a three-year-old[1] Kong and the youngest member of the Kong Family. Kiddy plays the role of the co-star[2] in the games Donkey Kong Country 3 and Donkey Kong Land III. He is the younger brother of Chunky Kong and younger cousin of Dixie and Tiny Kong.

A Baby for a Sidekick

At the start of Donkey Kong Country 3, Dixie arrives in the Northern Kremisphere in search of the missing Donkey Kong and Diddy Kong. She goes to Funky's Rentals, where Funky Kong has been reluctantly babysitting Kiddy Kong. The chore is passed on to Dixie, and he joins her in her quest.

Kiddy has great strength and rolling speed (like Donkey and Diddy respectively) and is able to throw Dixie high into the sky. Despite this, throwing him upwards can cause him to break through cracked surfaces because of his weight, throwing him against the wall will make him roll which gives Dixie the chance to jump on and ride him like a Steel Keg, and Kiddy can bounce on water, which compliments Dixie's Helicopter Twirl. When defeated, he pounds the ground with his fists and cries loudly.

In the Game Boy Advance version of Donkey Kong Country 3, due to Kiddy being a toddler, he cannot participate in the Swanky's Dash, a fast-paced virtual reality game.

In Donkey Kong Land III, Kiddy once again teams up with his cousin Dixie. Again, Donkey Kong and Diddy go off on an adventure, this time searching for The Lost World, so Kiddy and Dixie also search for it.

Kiddy was set to appear as a playable character in the game Donkey Kong Racing before it was canceled, as seen in a trailer.[3]

In Donkey Konga 2, Kiddy Kong is referenced through his Japanese name Dinky Kong being used in one of Dixie's letters, he also makes a cameo in the game. According to Dixie's letter, despite it being his first time playing an instrument, Kiddy instantly understood the concept of playing the bongos and discovered he has a talent in rhythm, beat, and flow, being able to accurately hit the unique drums at the same time.

Kiddy has light brown fur and brown eyes. He has a large mouth, with a rather large bottom lip (a trait shared with his brother Chunky Kong). He has a chubby body with large are arms, and his legs and feet are disproportionately small in comparison. He wears a blue onesie and is depicted only in the official artworks with a green pacifier.

Kiddy Kong's attributes are mainly those of a toddler, matching his age. When Kiddy is defeated and loses a life, he throws a tantrum. He is, typical for toddlers, very curious, and is most likely unware of the true dangers that surround him. He can also be mischievous, with him and Dixie often pulling pranks on each other. (ex. if the player switches between Dixie and Kiddy, Kiddy will pick up Dixie by the head and Dixie will pop her bubblegum to scare Kiddy. During DKC3's end credits, they continue pranking each other with Dixie making Kiddy slip on ice and Kiddy ramming Dixie.) 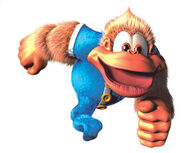 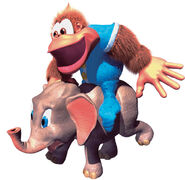 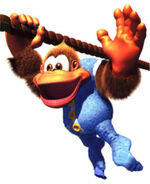 Artwork of Kiddy Kong climbing on a horizontal rope from the game Donkey Kong Country 3.

Artwork of Kiddy Kong holding up a wooden barrel from the game Donkey Kong Country 3.

Kiddy and Dixie Kong inside a cradle as seen in the Game Over screen of the game Donkey Kong Land III for Game Boy.

Kiddy Kong riding Ellie the Elephant as seen during the trailer for the canceled game Donkey Kong Racing.[3]

Sprite of Kiddy Kong standing in place, from the game Donkey Kong Country 3.