Kerozene is a boss in the Game Boy Advance remake version of Donkey Kong Country 2: Diddy's Kong Quest. He is fought at the end of K. Rool's Keep on Stronghold Showdown, replacing the cutscene from the SNES version.

He starts by appearing and slamming the two walls with his fists. He will grab two Kleevers and they will attempt to attack Diddy Kong and Dixie Kong. Kannonballs will appear and the monkeys need to throw them at the Kleevers. Then Kerozene will duck, then come back up with a glowing white face. A cannonball will appear right as he begins blowing fire. The Kongs must grab it and hit his head. They should then jump on his fists to avoid the fire and grab the cannonball. Throw it at his head again. He will duck and come back up, slamming his fists down, then his right fist again. Then the same, except no ducking, and he slams his left fist. Repeat with the ducking, and this time both fists are slammed down twice. He will first throw a fireball making a wall of fire around the cannonball, and then raise his fists off the ground so he isn't burnt. Then he'll do it again if the apes miss his head. After defeating him, he will fall with smoke coming from his mouth. 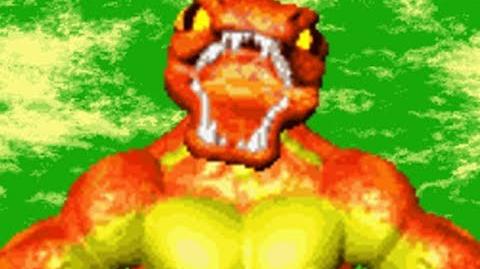