Karbines are usually present in the background of factory stages, using cannons to shoot fireballs downwards at the same plane of the Kongs, stopping their progress. They only appear in the Mekanos stage Fire-Ball Frenzy. They cannot be defeated or even attacked by the primates. By watching each Karbine's shooting patterns, the player must use good timing to avoid the projectiles after they bounce on the ground in order to move forward safely.

In Donkey Kong Land III, Karbines behave not different as they did in Donkey Kong Country 3 by shooting fireballs from the background and staying out of reach from the heroes. However, they are featured in more stages, and even have their own stage called Karbine Kaos. 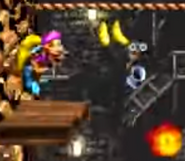 Dixie and Kiddy Kong next to a Karbine in the background, as seen in the game Donkey Kong Country 3 for GBA.