"I was run outta the swamps faster than you could say “Get outta here ya little arson dirt-bag.” Why d'ya think I went off to sea to become a pirate? Ya silly seadog."
—Kaptain Skurvy in the episode "The Kongo Bongo Festival of Lights" from the Donkey Kong Country animated series

Kaptain Skurvy was a recurring character and villain in the Donkey Kong Country animated series. General Klump is his long lost younger brother.

In the English version of the animated series, Kaptain Skurvy was voiced by Ron Rubin.

Like all pirates, Skurvy is greedy, selfish, tough, and brave. He scours the Seven Seas taking whatever he pleases. His career began when he robbed his own mother. He is not all bad, and idolizes his great-great-great-grandpappy, Quint Skurvy, listening to tales about him told by Skurvy's father. He also holds grudges, but he has a strong sense of honor, being angered when his ancestor's hidden treasure, the Crystal Coconut, was taken from him. Kaptain Skurvy is harsher than the character version of King K. Rool from the same animated series, and almost as cruel and evil as the counterpart of the same character appearing in the Donkey Kong game series. Skurvy speaks in a pirate-y accent, though he sounds Irish and even cockney at times. He deeply despises Donkey and Diddy Kong for stealing the Crystal Coconut.

Skurvy's first appearance in the animated series was during the episode "Booty and the Beast". In this episode, Skurvy, along with his shipmates, Kutlass, Green Kroc and Polly Roger the parrot, attempt to steal the legendary Crystal Coconut, which Skurvy believes to be his birthright, as his great-great-great-grand pappy, Quint Scurvy, was the one who first discovered it and was the one who brought it to Kongo Bongo Island.

Capturing Donkey and Diddy, Skurvy's theft seemed to have gone on without a hitch. Unfortunately for Skurvy, interference came in the form of a large Klaptrap named Junior. Junior managed to free Donkey and Diddy Kong, and during the fight between the Kongs and Skurvy's crew, Junior actually ate Skurvy's ship. After this disaster, Skurvy was sent packing along with his crew (minus Polly Roger, who had seemingly joined the Kremling Krew).

In the episode "Bug a Boogie", Skurvy tries to steal the Crystal Coconut once again, and this time succeeds and even manages to steal everything in Cranky's Cabin along with it. Unfortunately, Skurvy loses the coconut once again after he is tricked by King K. Rool into giving it back.

Skurvy's next appearance was in the episode "Ape-Nesia". Here he tricks an amnesia-stricken Donkey Kong into thinking he was Skurvy's first-mate, "Donkey Croc". Skurvy manipulates Donkey into stealing various objects, including the Crystal Coconut. Eventually, Donkey regains his memory and tricks Skurvy, along with K. Rool, into falling into a banana peel ridden trap. The end of the episode shows that both Skurvy and K. Rool both gained amnesia.

The last appearance of Skurvy was in the Christmas-themed episode, "The Kongo Bongo Festival of Lights". This episode revealed much of Skurvy's origin, with the most startling revelation being that King K. Rool's general, Klump, was Skurvy's long-lost younger brother. It was revealed that after Klump had accidentally caused a large fire that devastated his and Klump's family swamp, Skurvy in a show of brotherly love took the blame for the accident and was banished from the swamp.

The end of the same episode reveals that Klump had planned on leaving the Kremling Krew and joining Skurvy's crew, much to the protests of K. Rool. The episode seems to reveal why Skurvy was so cold-hearted as to do something as bad as break the Kongo Bongo Festival truce between the Kongs and the Kremlings (something even K. Rool would not do). It seems that losing Klump gave Skurvy the philosophy that if he could not "steal back what was lost," he could "steal everything else". 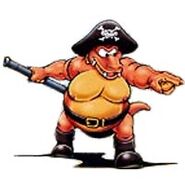 Kaptain Skurvy's ship as seen in the second season of the Donkey Kong Country animated series.