Not to be confused with the enemy Kannon from the games Donkey Kong Country 2 and Donkey Kong Land 2.

Kannons are types of special cannons that connect to Bonus Rooms from the games Donkey Kong Country 2 and Donkey Kong Land 2.

If the player picks a Kannonball up and throws it at a Kannon, it will become active. The active Kannon will blink between its natural colors and the green color in the Super Nintendo Entertainment System version of the game Donkey Kong Country 2 or it will shake and release sparks in the Game Boy Advance of the same game. Upon the Kongs touching the active Kannon, it will shoot them up and grant access to a Bonus Room. The Bonus Room usually requires the player to use Kannonballs to defeat the enemies inside it in order to earn the Kremkoin. If the player fails to clear the Bonus Room, they will need to find a Kannonball again to activate the same Kannon.

The Kannons are not so common as Bonus Barrels, but they can be found in some of the stages of both games. If the player spots a Kannon, a Kannonball required for activating it is usually someplace near the same cannon. However, in some cases, the player must traverse through obstacles while holding the Kannonball to reach the Kannon.

In Donkey Kong Land 2, during the second half of the boss battle against Kleaver, a giant sword boss of the world Krem Cauldron, after the boss receiving two hits by the player throwing Kannoballs at it, loaded Kannons will appear at the corners of the arena. While the boss floats at the top of the screen over each Kannon, constantly moving between back and forward, the player must control the primates, approach the Kannon, and press the "B" button at the right time in order to shoot a Kannoball upwards and hit Kleaver. By being successful, the player must quickly move to the other side of the stage to find another Kannon ready to shoot. To defeat Kleaver for good, the player must successfully hit the boss twice by using these Kannons.

In the GBA version of Donkey Kong Country 2, a Kannon also appears at the bottom of the main menu screen. Upon the player accessing the screen, Diddy Kong will always walk towards the Kannon and jump inside it. By the player selecting any of the options at the same screen, the Kannon will quickly target the chosen one and shoot Diddy at it, and the game will access the option. 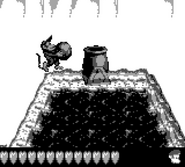 Diddy Kong about to throw a Kannonball at a Kannon, as seen in the game Donkey Kong Land 2 for Game Boy.

Sprites depicting animation frames of a Kannon seen at the main menu screen of the game Donkey Kong Country 2 for GBA.