Kackles are ghostly Kremlings from Donkey Kong Country 2: Diddy's Kong Quest that chase after Diddy and Dixie Kong in the level "Haunted Hall". As soon as the Kongs enter their territory, the chase begins.

They are one of the few enemies to not appear in Donkey Kong Land 2, but Kackle has a reason in specific; the Game Boy was not able to support his sprite. Thus Haunted Hall, their residence, has been replaced with Krazy Koaster.

Kackles appear as skeletal Kremlings wearing colorful bandannas, a patch on an eye and holding scimitars in a belt. Once the player pass the first gate of "Haunted Hall" level, a Kackle will be found already waiting for the Kongs; a timer appears above of the screen, which the Kongs must pass the zone before the time limit. In case that the Kongs have not left the zone yet and time runs out, the Kackle will appear and attacks either Diddy or Dixie. Getting Plus and Minus Barrels will alter for how long Kackles keep intangible. Mr. X, Kackles Prototype design appears to a pale-skinned Kremling with black clothes, two medals, red eyes, two hooks for his hands and has a saber. He appears to be a larger version of a regular Kremling Pirate, only with gray skin and a royal pirate shirt. The German booklet translates to this: "No one knows him or has seen him anywhere before." He also appears in the cover of the German Walkthrough guide of DKC2: [1]

It should be noted that Mr. X bears several similarities with Kackle, an undead enemy that made it into the game: both are dressed like pirates, have swords by their sides, possess no legs and are undead (since Mr. X has pale, clammy skin like that of an undead creature).

It has been confirmed by Steve Mayles that Mr. X was simply an early version of Kackle [2].

Diddy and Dixie being chased by a Kackle. 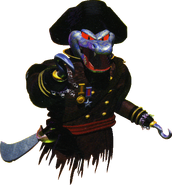 As seen in the instruction booklet. 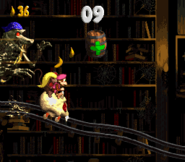