A Kaboing is a reptilian enemy, a member of the Kremling Krew. It looks exactly like a Klomp, but instead of possessing one peg-leg like the latter, a Kaboing have two spring-loaded peg legs. A Kaboing is first encountered in Donkey Kong Country 2: Diddy's Kong Quest as common enemies. Due to having two peg-legs, a Kaboing are incapable of walking normally and instead bounce and attempt to land on Diddy Kong or Dixie Kong. A simple bonk on the head is enough to defeat a Kaboing. 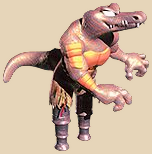 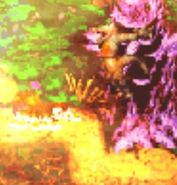 In the level Web Woods. This Kaboing is with Squitter the Spider.