Not to be confused with Crocodile Isle from the games Donkey Kong Country 2 and Donkey Kong Land 2.

"SQUAWK! He's back! DK! King K. Rool's island is just over there. He must be the one who stole your bananas and kidnapped the other Kongs! I've taken a quick look around, but the only area that hasn't been blocked off is that island with a cave on it over there! BWARK!"
—Squawks the Parrot in the game Donkey Kong 64

K. Rool's Mobile Island Fortress[1] (also referred as Crocodile Isle[2] or Crocodile Rock[3]) is an island-like warship used as base of operations for King K. Rool and his Kremling forces during the game Donkey Kong 64.

The watercraft has the shape of K. Rool itself supported by a floating platform with red and yellow propellers. The body is covered by rocks with steel patches, gray steel floors, pipes, three doors, wooden bridge and a huge hatch in the chest where the Blast-O-Matic pole is. The head and arms are made of bronze, red eyes, sharp nails and a golden crown.

The ship is used by K. Rool with his minions to explore seas and invade the DK Isles. There is also an islet-like ship towed by the main island via cable where K. Rool's giant younger brother, K. Lumsy, was imprisoned for refusing to destroy the DK Island. The warship is armed with a doomsday laser device, called the Blast-O-Matic, which was developed by Snide, is capable of destroying the DK Isles. While the Kremlings take a long time to prepare the weapon to shoot, King K. Rool sits on his chamber with his pet, where he uses a large monitor to order his subordinates around and watch the progress of the Kongs during the events of Donkey Kong 64.

Besides King K. Rool, the fortress is manned by Klumps and Kasplats, and operated by Kritters and Klaptraps. There are four levels in the island: Frantic Factory, Gloomy Galleon, Creepy Castle, and Hideout Helm. In Frantic Factory, Chunky Kong must be rescued by the other primates. In Hideout Helm, the final level of the game, all five playable Kongs must quickly traverse the location and turn off the Blast-O-Matic within a time limit to save the DK Isles. After the heroes are successful and collect all eight Boss Keys for unlocking K. Lumsy's cage, King K. Rool will try escape aboard his airship, the King Kruiser II. K. Lumsy will chase the vehicle around DK Island, stumble on a boulder and knock down the airship on the ground, setting the location for the final boss battle in the game.

After the defeat of King K. Rool in Donkey Kong 64, the Mobile Island Fortress does not make other appearance in the Donkey Kong series, making its current state unknown. 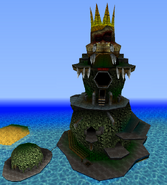 K. Lumsy in his cage inside the small prison island, as seen in the game Donkey Kong 64.

Entrance lobby to the level Frantic Factory, as seen in the game Donkey Kong 64.

Entrance lobby to the level Gloomy Galleon, as seen in the game Donkey Kong 64.

Entrance lobby to the level Creepy Castle, as seen in the game Donkey Kong 64.

Entrance lobby to the level Hideout Helm, as seen in the game Donkey Kong 64.