The first time the game is played this level will start with an opening cutscene in which the setting of the game is explained. The tikis hypnotize all the animals and steal Donkey's and Diddy Kong's Banana Hoard. Diddy gives chase the animals. A Tiki leader goes inside Donkey's and Diddy's Treehouse and tries to hypnotize Donkey Kong. But this has no effect on DK. The player now takes control of DK, beating up the Tiki and kicking it out of the treehouse. DK then climbs out of his treehouse and the level starts.

The level has a typical jungle atmosphere and contains minor threats along with the simplest enemies in the game. There a several Tutorial Pigs in this level showing you the basics of the game.

The level begins with Donkey Kong exiting his treehouse after beating Krazy Kalimba. Going left and inside the empty banana hoard cave, Donkey will find the first Puzzle Piece of the level. Getting out and travelling forward along the sandy pathway, the primate heads into a deeper part of the jungle, where he meets an Awk near a stone block that he can break. A dandelion and three more Awks follow the fallen stone pillar. Trees that the he can stand on are above him, and one of the trees has the letter "K" on it. Going left and over all tree platforms, Donkey will reach to a platform with a single dandelion on. If he blows on the plant, it will reveal the second Puzzle Piece. Moving forward, blocks are located after the tree holding the letter "K". A Tiki Goon is between a pair of blocks and a single one. The heroes reach a group of Screaming Pillars along the way; the fourth pillar quickly falls on top of another one when it is startled. These two pillars must be pounded on to reveal the third Puzzle Piece. After collecting the Puzzle Piece and moving on, Donkey passes a lone banana bunch and comes up to a hill. As he crosses it, a flying ship with a Tiki Pilot on it appears in the background.

However, it soon flies away, leaving the Kong unharmed. A pair of Awks and three plants to ground-pound that contain items follow the bridge. The second plant possesses the fourth Puzzle Piece. A floor tile nearby here has a hidden area under it, which contains some collectibles. Donkey can soon find two Frogoons around a raised area of land with a large, bouncy and red flower next to it in a slightly lower area. When the hero bounces on this, the two giant statues of some animal to the left and right of them shoot out many bananas. Collecting all forty bananas within about twenty-six seconds will reveal the fifth Puzzle Piece. After passing another raised area of land with a Frogoon on it, the Kong come along a path leading to an Awk and a series of three platforms. Two of the platforms are placed in the air with a gap between them, and another is located directly above the same gap. Bananas and a Tiki Goon are also on the platforms, and the letter "O" is in the gap. To reach the "O", DK must do a roll jump. Tutorial Pig and the first checkpoint wait immediately after these platforms.

Another raised area of land follows a DK Barrel in this area. Donkey can throw it and find his partner Diddy Kong. Two Awks march near a gap full of spikes ahead. Eventually, Donkey and Diddy reach a DK Platform that makes a new area appear in the background if pounded on several times. Once they shoot to the background with the barrel cannon that appears, they land on top of some tall, pillar-like platforms that are pushed downwards when hit. Awks are on some of these pillars, and they are followed by two additional Awks in a flat area of land. Going left by roll-jumping to the lone platform with a dandelion and blowing on the plant, it will reveal the sixth Puzzle Piece. Going forward, there are four platforms attached to a solid wall above here. The first of these platforms holds the letter "N", while the second carries a heart. If they climb up all of the platforms, they can reach a barrel cannon that shoots them towards many autofire barrels in the air. The barrels shoot them through the air and then onto solid ground again, where a wooden barrel and another fallen stone pillar can be found.

A raised area is after the pillar with two Tiki Goons on it. If the Kongs to ground-pound on the stone slab on the raised area, they will find a Bonus Room. Here, the primates must use the moving barrel cannon to collect all fifty-seven bananas, two Banana Coins and an Extra Life Balloon within thirty seconds to reveal the seventh Puzzle Piece. After the Bonus Room, a heart and another fallen stone pillar is located at the end of the raised land, which is followed by a bridge with some Awks on it. Awks and Rawks march along the pathway ahead, trying to attack the primates. Several stone structures are placed above all of these foes. Going left and over these platforms, the heroes will reach to the eighth Puzzle Piece floating above a stone platform. Moving forward and over the platforms will lead to the letter "G", collected by roll-jumping. Next, two large and red flowers and the Slot Machine Barrel can be seen ahead. The Kongs must ignore the barrel, go below it and all the way to the right to reveal a secret area with the ninth and final Puzzle Piece. If the primates bounce from the second large flower, they can hit the Slot Machine Barrel and complete the level.

The Jungle Hijinxs puzzle is of a pineapple with a light blue background. When all of the pieces are collected, the Hut Exterior artwork will be added to the Kong Gallery of the Image Gallery in the Extras menu. 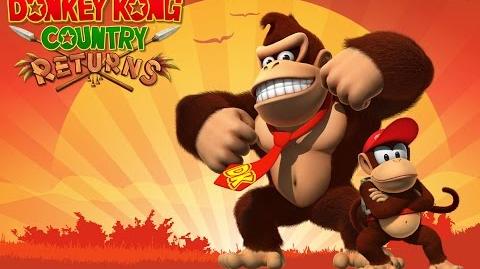