Not to be confused with Jungle World from the game DK: King of Swing.

This world is a jungle with dense vegetation and tall trees, and presence of some ruins (similar to ones in the third world). There is located Donkey and Diddy Kong's Treehouse. The first Cranky Kong's Shop is also located in the area, where the player can purchase optional items to use during levels and the Map Key to open the locked level Sunset Shore.

As initial world in both games, the Jungle levels introduce the physics and Kongs' moves to the player. In Jungle Hijinxs, the player learns about blow on plants to reveal items and ground-pound objects and platforms to reveal items and open paths. In King of Cling, the player is teached about grassy surfaces where the primates can cling and move at any direction. In Tree Top Bop, the Animal Buddy Rambi the Rhinoceros is presented as means to destroy obstacles and find hidden paths. In Canopy Cannons, most of level traversal is made by using barrel cannons. And in Crazy Cart, the use of mine cart vehicles to travel through mine tracks is introduced.

The boss level, Mugly's Mound, serves as residence to Mugly, a sharp-backed, rhino-like creature with a big appetite for anything (and everything; even the Kongs!). When meeting the primates, the creature ignores Donkey and Diddy Kong initially, because he is busy eating bananas. But soon Mugly ends hypnotized and possessed by Krazy Kalimba and attacks the heroes.

The most common enemies in the Jungle world are Awks, Frogoons and Tiki Goons. 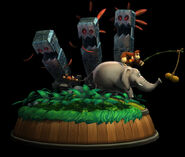