Jelly Jamboree is the fifth stage in Juicy Jungle from Donkey Kong Country: Tropical Freeze. It is preceded by Panicky Paddles and followed by Frosty Fruits.

The level takes place in a factory cache that stores gelatinous blocks, produced from fruit that had been processed during previous levels. A system of glass pipes conveying gelatinous matter can be seen in the background at the beginning of the level. Hoards of Jelly Blocks[1], the main gimmick of the level, must be bounced on to advance. With purple Jelly Blocks being the standard type, there are also green ones that help the Kongs gain more height, as well as blue Jelly Blocks that act as switches to rotate other Jelly Blocks, so they can be used. Items are usually located inside Jelly Blocks, and can be retrieved by jumping on any adjacent Jelly Block. These include Banana Bunches, but Watermelon Fuse Bombs also appear inside the blocks, and explode shortly after being released.

The level begins with many purple Jelly Blocks for the Kongs to bounce on, along with some Bouncy Tuckses infesting the area. Above a ground with green Jelly Blocks, a moving Barrel Cannon appears, and more Jelly Blocks follow, this time with blue ones that flip movable platforms. After a while, the Kongs encounter a number of Tufftons moving purple and green Jelly Blocks. A few Buzzies patrol the area. Afterwards, the Kongs will be fired from two skull Blast Barrels in a background plane, next to the first checkpoint.

The stage continues to take place in the same plane as the checkpoint. More Jelly Blocks appear afterwards along with a few Hootz carrying platforms. A Bouncy Tucks in the distance uses a blue Jelly Block to switch other blocks in the Kongs' path. Not too long after, a skull Barrel Cannon appears, which shoots the Kongs into a pile of Jelly Blocks. The player must then shake the Wii Remote to blast away the pile and have the Kongs continue to the second checkpoint, now located in a foreground plane.

More Bouncy Tucks appear, followed by another skull Barrel Cannon that ricochets the Kongs into a few jellies. The path ahead is strewn with more Tufftons, along with a few vines, and some additional Jelly Blocks. After passing a platform, a few more blocks and vines appear, as well as some Barrel Cannons leading between two massive wooden ducts processing jelly. Directly above several obstructing blocks flipped by Bouncy Tucks is the Slot Machine Barrel. 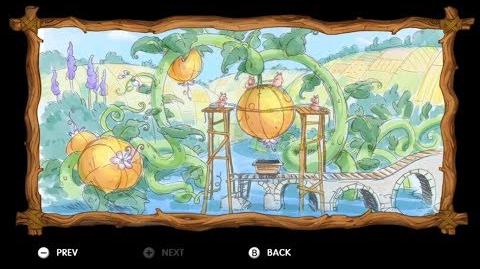