In the game Donkey Kong Country 2, Invincibility Barrels are quite rare. They only appear in a few select stages. Upon the primates making contact with the barrel, it will break, and the heroes' bodies will constantly blink between their natural colors and a white glowing when under the invincibility state. The player will also hear a characteristic sound effect. Any enemies who make contact with a main character while invincible will be defeated. Only in the Super Nintendo Entertainment System version of the same game and under the effects of the barrel, Diddy and Dixie Kong are also capable of bouncing on stronger enemies, such as Zingers and Krunchas, skill displayed only by Rambi the Rhinoceros and Rattly the Rattlesnake. In both game versions, the same effect also allows the heroes to walk over spike traps safely, but they still will be defeated instantly by falling into pits.

During the same game, an Invincibility Barrel can be first found in the stage Gangplank Galley of the world Gangplank Galleon. Here, at the final section of the stage, the barrel effect can be used to defeat a large number of enemies, including some Krunchas moving over platforms leading to a Bonus Barrel.

Inside the stage Lava Lagoon of the world Crocodile Cauldron, there are two Invincibility Barrels. The temporary effect provided by the barrels will allow the Kongs to withstand the boiling water of the location. At the final section of the stage, next to the last Clapper the Seal, the player can find a secret path underwater leading to the second Invincibility Barrel and a DK Coin.

After the beginning of the stage Bramble Scramble of the world Krazy Kremland, it is possible to find an Invincibility Barrel floating high in the air, above a Click-Clack. By using the "Team-Up" move and throwing the secondary Kong towards the barrel, the player can use its effects. Next to the same location of the barrel, there is a hole leading to a passage. The same passage lacks planks for protection from the brambles. After touching the Invincibility Barrel, the player must quicky go through the passage, jumping over some elevated brambles, to reach a Barrel Cannon eventually. The player can use the same cannon to shoot the primates upwards and be able to access a Bonus Barrel.

In the stage Klobber Karnage of the Lost World, inside the second Bonus Room, accessible by an invisible Barrel Cannon at the end of the stage, the player must make the heroes to jump towards an Invincibility Barrel and quickly run over some spikes. The player must also use the invincible state to defeat a total of twelve Zingers, while reaching another Invincibility Barrel to extend the effect.

In the Game Boy Advance version of Donkey Kong Country 2, during every round of the minigame Bag a Bug, available to play at any location of the Klubba's Kiosk, an Invincibility Barrel also appears, after about twenty seconds has passed. The same barrel gives temporary immunity to the heroes from the Klubba's club attacks.

Invincibility Barrels also appear inside some stages of the Crocodile Isle in the game Donkey Kong Land 2. Despite they providing similar status to the Kongs as in Donkey Kong Country 2, these barrels are even rare to find, and the duration of the invincibility effect is slightly shorter.

In the game Donkey Kong Country 3, the Invincibility Barrel works in similar way to the previous games.

The barrel can be first found in the stage Riverside Race of the world Kremwood Forest, underwater and right below the letter "N" of the K-O-N-G Letters. The invincibility effect also allows the heroes to defeat and bounce on Buzzes. In fact, the player must bounce over three red Buzzes to be able reach a Bonus Barrel, located over a cliff outside the water. During the same stage, the invincibility state cannot harm the swarm of tiny, red Buzzes that pursue the primates constantly, but it makes the Kongs temporarily immune to them.

In the stage Ripsaw Rage of the world Mekanos of the same game, some Invincibility Barrels also appear. The stage is set on large, hollow trees, and a giant saw will constantly rise from the bottom of the screen, threating the heroes. Inside the second Bonus Room of the stage, the Kongs will fall over an Invincibility Barrel. In the room, where the player must collect fifteen green bananas within a time limit, the effect of the barrel will make the primates immune to the large saw, allowing them to step on it. The same effect will also last for the entire duration of the Bonus Room. At the final section of the same stage, by the player finding an invisible Autofire Barrel under a platform, right below the letter "G" of the K-O-N-G Letters, it will allow them to reach another Invincibility Barrel, step on the saw safely and take an alternative path. This path leads to the Koin holding the DK Coin of the stage, and it is the only way to reach a Steel Keg required for defeating the enemy. 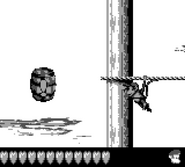 Diddy Kong moving on a horizontal rope towards an Invincibility Barrel, as seen in the game Donkey Kong Land 2 for Game Boy.