Hooks are floating supports used by the Kongs for reaching high places and traversing pits in the games Donkey Kong Country 2 and Donkey Kong Land 2.

These objects resemble small, regular hooks made out of metal and pointing downwards. They can be found floating in the air inside stages of the Crocodile Isle. The hooks must be used in order to traverse pits too wide for the heroes' jumping range or reach platforms in high places. They also allow the primates to grab collectables in high locations, such as Extra Life Balloons and DK Coins, or get inside regular Barrel Cannons or even Bonus Barrels.

Upon contact with them, both main characters will hang on the hooks automatically: Diddy Kong by using his tail, and Dixie Kong by using her ponytail. The Kongs can only leave one of these supports by jumping. That way, the primates can jump between hooks when there are multiple ones nearby the same spot. It is also possible for dropping down from a hook by the player pressing the Jump button while holding the "Down" button. After touching any hook, both heroes can hang on it for as long they stay still, however they can be harmed by aerial enemies or incoming projectiles. It is not possible to hang on hooks when the Kongs are holding any object. And Animal Buddies cannot interact with hooks at any capacity either.

In Donkey Kong Country 2, it is possible to use the "Team-Up" move to throw the secondary Kong towards a hook, making both main characters to hang on it upon contact.

In this game, the hooks are first featured in the Gangplank Galleon stage Gangplank Galley. They must be used in order to collect the DK Coin at the beginning of the location. Inside the second Bonus Room of the stage, hooks are the only means of reaching the Kremkoin floating over a high place of the room. Later, at the end, the supports must be used to traverse a wide pit preceding the End of Stage Target. In fact, here and in some later stages of the same game, only hooks provide enough height for the primates to jump and earn a prize by falling on the respective End of Stage Targets.

During the first half of the Gangplank Galleon stage Topsail Trouble, hooks are alternative means for reaching high places instead of the high jump ability of Rattly the Rattlesnake. In case of the player losing the Animal Buddy, these same hooks are the only way to progress throughout this section of the stage.

There are also invisible hooks in Donkey Kong Country 2. They reveal themselves only after the heroes touch them. Usually, this type of hook is used for reaching a Bonus Barrel or special collectable. And, sometimes, the location of invisible hooks is marked by a trail of bananas.

Multiple hooks appear during the battle against Kleever, the boss of the world Crocodile Cauldron. During the first phase, after each time the giant sword is harmed by the Kongs throwing a Kannonball at the boss, a trail of hooks will fall down from the top of the screen and stay in place above the lava pit of the arena. The primates must jump between them and quickly move towards the other edge of the arena, while avoiding fireballs thrown by Kleever. After the heroes reaching the destination beyond the lava, the trail of hooks just falls into the lava. Later, during the entire second phase of the battle, many hooks will appear above the lava pit, allowing the Kongs to reach the top of the arena. Here, these supports must also be used to traverse between both sides of the stage, and evade Kleever when the floating sword uses its quick swing attacks. The same hooks fall into the lava after the boss is finally beaten.

In Donkey Kong Land 2, hooks are also present in many stages of the game, but they are more rare when compared to Donkey Kong Country 2. The hooks have the same functionality and behavior as in the previous game, the primates just hang on them upon contact, and they are used for reaching high places and moving over wide pits. However, there are no invisible hooks in Donkey Kong Land 2. 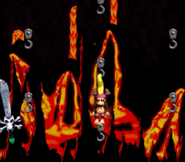 Dixie and Diddy Kong hanging on a Hook during the second phase of the boss battle against Kleever, as seen in the game Donkey Kong Country 2: Diddy's Kong Quest for SNES. 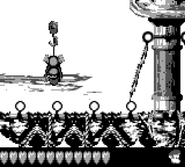 Diddy Kong hanging on a Hook in order to reach a high platform, as seen in the game Donkey Kong Land 2 for Game Boy. 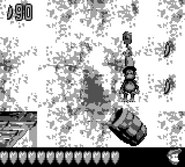 Dixie Kong hanging on a Hook above a Barrel Cannon, as seen in the game Donkey Kong Land 2 for Game Boy.