Hard Hat is the mole boss of the world Monkey Mountains and Chimpanzee Clouds of the Donkey Kong Island, as well as the third boss overall in the game Donkey Kong Land. He appears in the level Mad Mole Holes, preceded by Collapsing Clouds and followed by Construction Site Fight.

The boss arena is a cave with three holes on the ground at the middle and edges of it. Hard Hat uses them to move around the location. After revealing himself, the boss will stare at the right or left direction for a few seconds, and then he will throw his hat towards the edge of the screen. Donkey and Diddy Kong must dodge the object by jumping over it. Without the protective hat and before Hard Hat leaving by entering the hole, he will be vulnerable against jump attacks by the Kongs. Jumping on the boss' head while he still wearing his hat will not harm the primates, but it will make them to bounce back and can also drop them in the way of the hat after it is thrown, defeating one of the heroes. After reappearing, Hard Hat will be wearing a new hat and he will repeat his attack pattern. Each successful bounce attack by the Kongs will make the boss to move and throw his hat faster. Hard Hat will be taken down after receiving a total of eight hits.

By Hard Hat being defeated, three banana bunches will drop down from the top of the screen, and the world Big Ape City will become accessible for the primates. 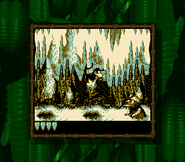 Diddy Kong battling Hard Hat in the game Donkey Kong Land for Game Boy, as seen on the Super Game Boy for SNES.