In the opening cutscene of both games, as soon as the volcano of Donkey Kong Island erupts and the Tiki Tong Tower emerges, many tikis are released, with Gong-Oh being among them. The Tiki Tak Tribe leaders start to hypnotize animals in the island to steal bananas. Gong-Oh is seen hypnotizing a zebra, and after, it is shown guiding some elephants and giraffes pulling bananas towards the volcano.

Some time later, in the Ruins boss level Ruined Roost, Donkey and Diddy Kong find a large egg next to a golden gong and two monkey statues holding mallets. Gong-Oh suddenly appears, and then uses telekinesis to steal the egg, move the statues and sound the gong violently. The gong sound cracks the egg and breaks the stone platform where the Kongs are standing on, making them to fall. After the heroes land below, Gong-Oh drops the large egg into a golden cauldron, filled by bombs, and hypnotizes and possesses the creature inside the egg. The egg hatches and Stu, a large red bird, threatens the primates. Stu attacks by throwing bombs at the ground and dropping missiles, capable of levering pillar bases in the arena. The heroes must quickly grab the bombs and throw them back at Stu before they explode. The Kongs also must avoid Stu's diving attacks. The boss will be defeated after taking a total of six hits. At the end, Stu will drop down, his cauldron will crackdown, revealing his funny shaped body, and the bird will pass out. Gong-Oh will leave Stu's body and stay stunned for a few seconds. Now, the player can jump towards the tiki and punch it multiple times, sending it away, or wait for the tiki to escape.

Inside the Tiki Tong Tower, before the Kongs finally confronting Tiki Tong in the final boss battle, Gong-Oh and the other Tiki Tak Tribe leaders will be seen again. They use the stolen bananas to turn the leaders into hands for Tiki Tong to attack the primates. After Tiki Tong and its hands are destroyed by the heroes, it is safe to assume that Gong-Oh is also defeated for good.

Gong-Oh has a large gong connected to its head and two skinny arms with circular hands, similar to Xylobone. It has eyes that are different in a way from the other leaders. They are backwards colored. it also has three creases on the lower part of it face. One thing that is notable about the tiki is that it also has its instrument attached to it, not it being the instrument, but rather the gong has multiple strings attached to it, as well as the tiki's head. A small detail is that the tiki's eyes look strained, as they have dark colored eye flaps that looks like a sign of tiredness. 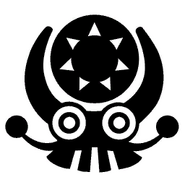 Gong-Oh's silhouette always seen at the screen when the Kongs are defeated in any levels of the Ruins world in both games.