Gloomy Gulch is the fifth area of Donkey Kong Country 2: Diddy's Kong Quest and the fourth in Donkey Kong Land 2. The area, as the name suggests, is quite gloomy, scary, aged, etc., and so are most of the stages in this area. The stages often have ghost-like enemies, though the usual Klomps and the like are found as well.

There is also a stage in this world, Haunted Hall, which was remastered into Krazy Koaster, an amusement park stage in Donkey Kong Land 2. This happened because of the Game Boy's graphical limitations and being unable to support the sprites for Kackle.

This is the first "woods" area of Gloomy Gulch. It apparently takes place during the late evening, and there are a few parts where light breaks through (though both lighting effects don't tamper with the sight of the player much). A Kloak will spawn directly above the Kongs to throw items, though these items are not harmful, and if patient, it will throw two treasure chests, both containing two Green Balloons when broken. Ghost Ropes will appear to help the Kongs transverse long gaps, though be careful, as the Ghost Ropes disappear and re-appear randomly.

Haunted Hall is the second stage in Gloomy Gulch, exclusive to Donkey Kong Country 2: Diddy's Kong Quest. It is a Mine Cart stage with a background that looks like an old Library. Haunted Hall is home of Kackle, the ghost of the Hall. When the Kongs go through the first gate, Kackle is waiting promptly for them, and a timer will appear on the top of the screen. After that, it will count down. To keep time from running out, use the "+" Barrels to add five seconds to your total time, but if you hit the "-" Barrels, five seconds will be taken away from your total time. If you run out of time, Kackle will take the life of one of your players. To make it to the end, ride the mine cart while avoiding hitting the gates themselves, what's behind them, and what's below them. Good timing and some experience is required to get through.

This stage, replacing Haunted Hall in Donkey Kong Land 2, takes place in an amusement park and is the second stage in the world. Zingers are inhabitants here.

Gusty Glade, as the name suggests, is a woods area that is quite gusty and windy. This often interferes with the Kong's way of traveling the level. The wind will be neutral at the start, but soon after it will either blow strongly to the left or right, with no break in between. The wind is a blessing and a curse, as it will greatly assist the Kong's jumps, though may backfire and doom them to various endless pits or throw them into enemies. Rattly can be found early in the stage by using the team-up and throwing a Kong over to the left where the stage starts.

Parrot Chute Panic's stage name is clearly a pun on "Parachute Panic". Quawks the Parrot makes his debut in the game series here, and is only found in this stage in Donkey Kong Country 2: Diddy's Kong Quest. Compared to Squawks, this particular parrot cannot fly upwards or even shoot nuts, it can only descend downwards. Many Zingers and other foes will appear to pester the Kongs in their downward flight. Thus, players will need to carefully guide the parrot down, similar to a parachute somewhat, hence the stage name.

The final woods stage of the area (and the game), it takes place in presumably old woods, due to the yellow leaves, and the fog foreground effect. The first portion of the stage will be played as Diddy/Dixie, but later a Squitter Animal Barrel can be found in a small room. The rest of the stage is played as the spider. His web platforms are often used to advance across pits, and enemies will swarm on Squitter at times.

The area guardian, Kreepy Krow is the ghostly spirit of Krow, the boss of the first world of Donkey Kong Country 2: Diddy's Kong Quest. Avoid the spirit Mini-Neckies and hit the live one to make a Barrel appear, and hit K.K. with it for damage. Chase Kreepy up the ship mast and repeat the process until it's dead, this time for good.

Diddy and Dixie exploring Gloomy Gulch with two Kloaks behind them.
Add a photo to this gallery 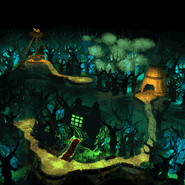 The overview map of Gloomy Gulch.

The overview map of Gloomy Gulch in the Game Boy Advance version.
Add a photo to this gallery
Retrieved from "https://donkeykong.fandom.com/wiki/Gloomy_Gulch?oldid=59300"
Community content is available under CC-BY-SA unless otherwise noted.