Gloomy Galleon is the fourth level in the game Donkey Kong 64 for Nintendo 64. It is a water-based cove area featuring King K. Rool's sunken navy from earlier Donkey Kong series games. The stage has a mild pirate theme with both underwater and cave-like areas. Players have to use Lanky Kong to defeat the area's boss, which is Puftoss. In this level, Lanky Kong can also transform into Enguarde. This level is also the first to feature Koshas.

Gloomy Galleon is an eerie cove that is full of caverns, which hold many secret treasures and shipwrecks from perhaps earlier Donkey Kong games. Outside these caves are lagoons towered over by cliffs. One of the areas features a lighthouse, and beneath that structure are two switches that have the ability to raise and lower the world's water level. This area also features a sailing ship that appears to be owned by King K. Rool, and a hidden underwater Mermaid palace along with many treasure chests.

The other area of the world features many sunken objects, including what appears to be the sunken remains of the Gangplank Galleon, which is split in half and holds Golden Bananas. There is also a hidden mechanical fish here and a cove where the player must race a seal.

Inside one of the cave's chambers.

One of Gloomy Galleon's lagoons.

Possible wreck of the Gangplank Galleon.

A room inside the sunken ship.

Another room inside the sunken ship.

The interior of the sunken submarine.

The interior of the large treasure chest.

The interior of the lighthouse, with its power source visible and active.

Inside the mermaid's palace.

The hold of the ship that sails around the lighthouse. 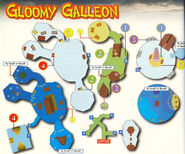