"Give me that giant banana, I will take care of it for you. Come on, get going, you can't rest yet!"
—Cranky Kong in Donkey Kong Country for GBA

A Giant Banana is a large banana won as a prize or trophy of sorts by defeating a boss in the original Donkey Kong Country game. They would appear at the end of every boss battle and be presumably added to the hoard, but oddly the game does not show the hoard gaining any bananas until King K. Rool is beaten. According to the Game Boy Advance version of the game, Cranky Kong takes care of the giant bananas. Also, a Giant Banana would appear near his cabin when visited.

These bananas have made a few Easter Egg appearances, such as in the background of the boss level K. Rool's Duel in The Flying Krock, and Swanky Kong's Bonus Bonanza, both from Donkey Kong Country 2: Diddy's Kong Quest for the Super Nintendo Entertainment System. But they have not appeared in any other Donkey Kong Country game since. In its sequels, the Giant Bananas were replaced with prize coins, like Kremkoins and Bonus Coins.

It is worth noting that in the SNES and Game Boy Color versions of Donkey Kong Country, the giant bananas had Nintendo logos on them, but were removed in the GBA version.

In Mario Kart: Double Dash!!, there are Giant Banana Peels. They are special items obtainable only by Donkey and Diddy Kong during courses.

Giant Banana in the background sprite of the boss stage Gang-Plank Galleon from Donkey Kong Country for SNES. 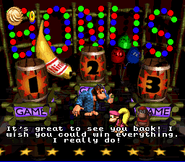 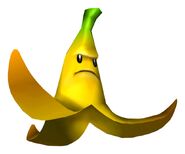