Donkey Kong Wiki
Register
Don't have an account?
Sign In
Advertisement
in: Article stubs, Articles in need of images, Stages,
and 9 more

As the first stage of Gloomy Gulch, Diddy and Dixie Kong will find themselves in a forest like area, with large trees that seemingly have faces. Encountered throughout the location are Ghost Ropes that will frequently appear, and then disappear. They are harmless enemies and usually must be used to climb and reach high places or traverse over pits. Other notable enemies also found here are Kloaks, Klomps, Spinies, Klampons, Zingers, Klobbers and Krunchas.

The DK Coin is not too far from the "O" of the K-O-N-G Letters, in fact it is right underneath the platform below it. In order to reach the item, the primates must simply roll off into the pit at the right of the letter, moving towards left and below the platform and jump into a Barrel Cannon. The heroes will be blast towards the coin and then back to the top of the upper platform.

The location of the "K" of the K-O-N-G Letters, as seen in the game Donkey Kong Country 2: Diddy's Kong Quest for SFC/SNES. 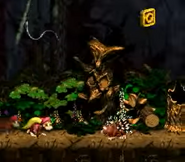 The location of the "O" of the K-O-N-G Letters, as seen in the game Donkey Kong Country 2: Diddy's Kong Quest for SFC/SNES.

The first Bonus Room of the stage, as seen in the game Donkey Kong Country 2: Diddy's Kong Quest for SFC/SNES.