Gangplank Galleon is the name of King K. Rool's ship, and it is the first world in the games Donkey Kong Country 2: Diddy's Kong Quest and Donkey Kong Land 2.

The galleon is wooden with three riggings, three windows with cannons on the edges, the Kremling Krew symbol on the middle sailboat and a black flag on the back, K. Rool's golden figurehead on the ship bow and a red flag striped with black at the top of the mainbrace.

In Donkey Kong Land 2, Kaptain K. Rool raised the galleon from the waters, newly reviving it as with the rest of Crocodile Isle. It is ravaged somewhat from being underwater for so long, and is later sunken once more by the Kongs, this time for good.

In Donkey Kong 64, in the Gloomy Galleon's water cove, what is believed to be the remains of the galleon lies on the seabed ripped in half. Despite all the decay and seaweed, Kaptain K. Rool's portraits and log book, as with the ship itself, remained in perfect condition (how this is possible is never explained). 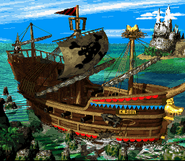 The world map of Gangplank Galleon in Donkey Kong Land 2 for Game Boy.

The world map of Gangplank Galleon in Donkey Kong Country 2 for GBA.

Sunken galleon in the Gloomy Galleon stage from Donkey Kong 64.
Add a photo to this gallery

Retrieved from "https://donkeykong.fandom.com/wiki/Gangplank_Galleon?oldid=66640"
Community content is available under CC-BY-SA unless otherwise noted.