This level takes place in a volcano, which is full of Char-chars and Ultra Char-chars that hover around most areas of the level. They travel all over the place in all directions, so the Kongs must carefully maneuver around them. This level is also the first to feature lava that Donkey and Diddy Kong can fall into. They must avoid this lava by hopping along large volcanic rocks and falling platforms. Enemies in this level include Char-chars, Tiki Goons, Tiki Torches, Tiki Buzzes, and Tiki Bombers.

The level begins outside the factory on a slanted path of basalt with a Char-char on it. Ahead is a high platform that the Kongs must climb over the reach an area with two spaced-out, solid, stone platforms. Tiki Goons infest the last to the two platforms, but a giant Char-char moves above the first. There is a platform connected to a piece of basalt rock for the heroes to climb over. Under it is a DK Barrel.

A pathway composed of basalt is farther ahead. The basalt shortly after the DK Barrel supports a stone platform with Tiki Goons on it. Near here is a red platform with the letter K of the K-O-N-G Letters on it. Char-chars travel all around this area, even in the following part of the level, where there are three small sections of basalt that are separated by small gaps. A giant Char-char floats above the Kongs here too, as well as on the above stone platforms that lead to a Puzzle Piece. A thick stone platform with a Tiki Torch is after this, along with another platform, which has a Tiki Goon on it, with the letter O under it. More solid platforms being supported by basalt are ahead, and Tiki Bombers attack from them. Between two of these platforms is a switch that can quickly rise and take the primates to the next part of the level if they pound on it three times. When they reach the higher area with the switch, they come across the Tutorial Pig and the checkpoint.

Now about halfway through the level, the primates can find two platforms ahead that crumble with their weight. After them is a solid area with a stone pathway. Large Char-chars hover around this area. On the other side of a gap nearby is a Tiki Torch and the letter N, while on a few platforms before it is a Tiki Bomber and a Tiki Goon. These platforms aid the heroes in reaching a higher area, where they can find a few cracked stones to smash. When they break through them, they can find themselves in a lower area, where there is a large Char-char and a platform with a DK Barrel ahead. After this platform is another area with a solid, stone pathway. A vine switch is above the ground here, and a platform infested with a Tiki Torch and a Tiki Goon is nearby. More stone platforms, which are surrounded by moving Char-chars, are farther ahead. One of these platforms found in a higher area has some collectibles on it, while the one after it has a Tiki Bomber. Sections of basalt separated by small gaps are farther ahead, which have a small Char-char bouncing around them. After passing a Tiki Goon, the group can find an area with some curved pathways that make up a small maze. If the heroes stay on the upper part of the maze, they can progress. Large Char-chars float around this area. If the heroes maneuver around the maze-like area, they can find the letter G at a dead end. Eventually, the Kongs can make their way through a curved passage to make it to a Tiki Bomber on a solid platform. A few platforms that crumble when landed on are farther ahead, some of which that have Tiki Buzzes and an Extra Life Balloon between them. Above a group of four of these platforms is a Slot Machine Barrel that makes the level complete when hit.

The Furious Fire puzzle is of a strawberry on a light green background. When all pieces are found, the Colonel Pluck drawing will be added to the Boss gallery of the Image Gallery. 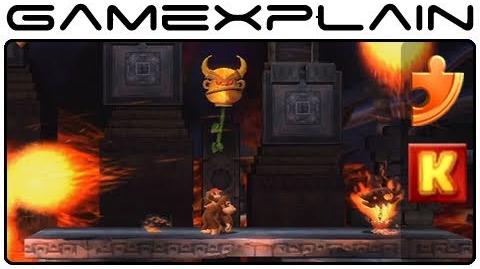 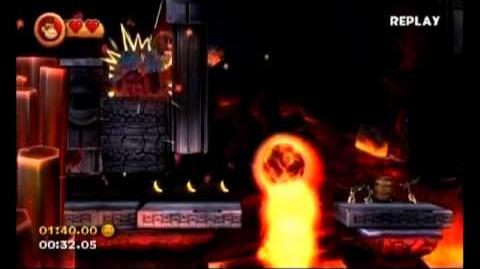