"All the flights cleared, dudes. Choose and cruise!"
—Funky Kong in the game Donkey Kong Country 2 for GBA

Funky's Flights II is the name of Funky Kong's air service for accessing the overworld map of the Crocodile Isle in the game Donkey Kong Country 2.

Funky Kong reworked his business practice in time for Donkey Kong Country 2, now offering flight service around the Crocodile Isle in his airship, and being called Funky's Flights II. There is a Funky's Flights II in every world of the island, except for the Lost World. Because it is not possible for Diddy and Dixie Kong to access the overworld map of the island without defeating a boss, the service is a safer alternative. Upon arriving at Funky's Flights II, Funky will present the heroes with his airship for them to fly around in. However, the vehicle can only access areas that the Kongs have already unlocked, as a means of preventing the player from skipping stages.

In the Super Nintendo Entertainment System version, the Biplane Barrel is the airship of the service, and for the first use of it, Funky would charge Diddy and Dixie two Banana Coins at every location. However, any other later flights would be free.

In the Game Boy Advance version, the Funky's Flights II possesses a Gyrocopter instead of a Biplane Barrel. A payment of Banana Coins for the initial use is no longer required. Upon the player reaching any location of the service, and completing a single mission within a time limit for Funky Kong, the gorilla will make the airship always available for free by a prompt at the right screen of the pause menu in the maps of the game. Besides, in each location of the Funky's Flights II, there is a mission accessible by Golden Barrels where the player must control the Gyrocopter in order to complete a task and land the vehicle on a helipad within a time limit. By completing each of these missions once, the player receives DK Coins.

The missions available in the Funky's Flights II of the GBA version of Donkey Kong Country 2 are minigames. They are specific ones for each world of the Crocodile Isle (except for the Lost World). After they are unlocked in the main game mode, each minigame can also be played by accessing Funky's Flights in the Bonus Games option at the main menu screen. The player is able to set time records by completing the missions quickly. It is also possible for two players to play them in multiplayer by using a Game Link Cable[1] between two Game Boy Advance systems.

During the missions, the Gyrocopter possesses a green durability meter. If the meter is depleted completely by the vehicle taking too much damage, the airship explodes, but the player can choose to continue the mission. However, by the player continuing it, the Gyrocopter will return to the initial helipad, the time counter will continue from the same instant when the airship exploded, and the entire progress of the current mission will be lost. The same also happens if the the Gyrocopter goes underwater, and its air supply is depleted completely. In the missions where the objectives are to locate objects or hostages, there is usually a radar at the screen in order to assist the search. During some missions, there are red boxes scattered around the environments containing limited ammunition. The ammunition can be used to shoot at and defeat enemies or destroy barriers. Green boxes displaying a white wrench icon on them refill the entire durability meter of the Gyrocopter after they are collected. By the player collecting watches displaying the number ten, they reduce the time counter of the mission in ten seconds. Oddly, the regular collectables mentioned can be also shoot at and blow up by the airship. Usually, it is also possible to defeat regular enemies during missions by the vehicle simply colliding against them, and losing some durability in the process.

The missions of the Funky's Flights II are as follows by world locations of the Crocodile Isle: 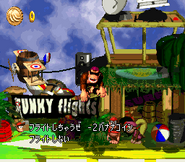 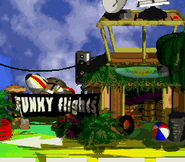 Funky's Flights II as seen in the game Donkey Kong Country 2 for GBA.

Funky's Flights II as seen in the game Super Donkey Kong 2 for GBA.